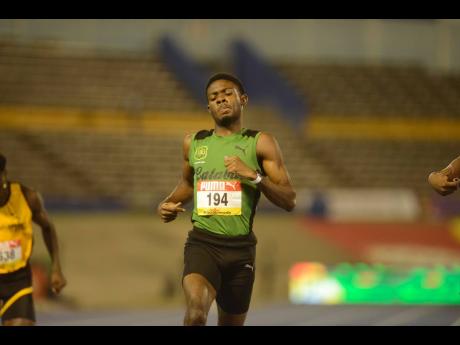 Shorn Hector
Shorn Hector/Photographer Calabar's Christopher Taylor crosses the line in front in the Class One Boys 200m heats at the ISSA/GraceKennedy Boys and Girls Athletics Championships at the National Stadium last night.

Calabar’s sprint star Christopher Taylor seemed to have picked up an injury on his way to winning heat One of the boys Class One 200m at the ISSA/GraceKennedy Boys and Girls Athletics Championships at the National Stadium last evening.

Taylor, who along with team-mate De'Jour Russell were accused of assaulting a teacher at the Red Hills Road-based institution, broke his stride and grimmaced, as he came off the curve before recovering to win the event in 21.69 seconds to book his place in the semi-finals.

Calabar then suffered a setback in heat five, when medal hopeful Chadwick Stewart pulled up on curve with what appears to be a leg injury.

Edwin Allen’s star sprinter Kevona Davis barely broke a sweat on her way to winning Heat One of the girls Class Two 200m in 23.77 seconds.

Davis, who is the record holder in the event, will prove very difficult to beat in the event.

The powerfully-built sprinter is expected to be challenged by Holmwood’s Sashieka Steel, who finished second behind her in the 24.78 seconds.

St Jago’s Joanne Reid, who is one of the medal contenders in the event, won heat Three in 24.41 seconds ahead of Bridgeport’s Laila Pyne who also qualified semifinals in a time of 25.11 seconds.