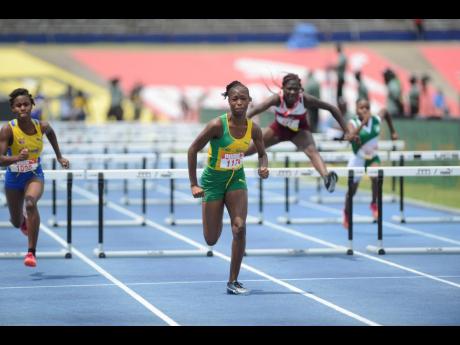 Jamaica’s College’s (JC) Jayd’n Johnson produced an impressive performance to capture Heat Two of the boys Class Three 100m hurdles to secure a spot in the semi-finals on day one of the ISSA/GraceKennedy Boys and Girls Championships at the National Stadium.

Johnson, who has been having an outstanding season so far, won his heat comfortably in a time of 13.52 seconds ahead of Rajaun Brooks from STEHTS 13.86 seconds.

Kingston College’s (KC) Amontae Wray, who is expected to challenge Johnson for the gold medal, captured his heat in a time of 13.61 seconds.

Ra’ John Gray of KC, who is also a medal contender in the event, won his heat in 13.88 seconds. Matthew Malcolm from JC (13.70), Demario Prince from St Jago (14.08) and Cornwall College’s Tandwaye Hazle (14.42) round out the top eight qualifiers for Friday’s semi-finals.

Meanwhile, on the girls' side, race favourite Chrystal Shaw of The Queens School leads all qualifiers to the semi-finals of the girls Class Three 80m hurdles after winning heat Three in time of 11.36 seconds.

Hydel’s Shania Myers, who is expected to challenge Shaw for the gold medal, will enter the semi-finals second fastest time after she comfortably capturing heat Four in 11.46 seconds.

In the meantime, Santae Wilson from Edwin Allen holds the fastest time of 10.75 going into the semi-finals of the girls Class Four 70m hurdles.