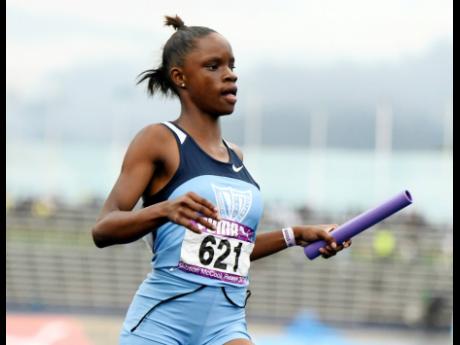 THE National Stadium will be buzzing with excitement over the next five days, starting today, as individuals and teams seek glory at the ISSA/GraceKennedy Boys and Girls’ Athletics Championships (Champs), in what is expected to be one of the most intense and competitive Championships for years.

Among the boys, it should be a dogfight between defending champions Calabar High School and former champions Kingston College (KC). Former champions, Jamaica College (JC) could be the biggest, as despite not being favoured to win, their performance could help to decide who come out on top.

“The Girls are very confident that no team can beat them,” Dyke said. “With this kind of confidence, we expect them to go out there and deliver.”

After a great early start, there was some lapse in mid season with injuries being the major factor, but they have shown a new energy a couple of weeks before Champs, and head coach Dave Anderson likes what he sees.

“Preparation has gone well leading up to the Championships and the girls have bounced back from a mediocre Central Championships, as was shown at the Grand Prix finals, with the team putting on a quality performance,” he said. “I am just expecting the team to give of their best over the five days of Champs.”

After being runners up for the past four years, Hydel head coach Corey Bennett is now very cautious. “We are taking it one event at at time and we will see what happens,” he said.

“It is not about us retaining our second place finish, or moving up, but just to take things as they come on the days of Champs.”

Jago have produced quality performances all season and head coach, Keilando Goburn, said that his team is ready.

“They are in high gear as preparation has gone well, as they have put in the work, and everybody is in high spirits,” Goburn said. “It is just to get them in the right place psychologically, and hopefully their best performance for the season will come at Champs.”

Calabar will be hoping to make it eight wins in a row, but in KC, they have a real threat as the North Street team has been the most dominant male team leading up to Champs, and do have a real chance to lift their first title since 2009. Omar Hawes, assistant coach of Calabar, said that he is ready for the challenge and his team is confident of going all the way.

“We know what it takes to be champions and we are ready to defend our title and make it eight wins in a row,” he said. “Despite the talk on the road that we are weak in the lower classes, we have heard this year upon year, and the boys here have improved drastically over the past three weeks. Despite a few of them making it to Champs for the first time, they are ready to perform and are looking forward to it.”

New KC head coach Leford Grant is very confident that his team will win Champs when he spoke yesterday.

“We have prepared the boys well and we are confident of victory,” Grant said. “These boys are a special bunch and they have used the Manning Cup victory to motivate them.”

In his first year at the helm at JC after the past four years in the same position at KC, Neil Harrison is also optimistic.

“Definitely, this will be a tough one going up against the big two (Calabar and KC), but we are optimistic after rigid preparation, and hopefully the guys will rise to the occasion,” Harrison said.

One of the athletes who is expected to score some quality points for KC, Wayne Pinnock, will be on show today, when he competes in the preliminary round of the Boy’s Long Jump at 1 p.m., and the 110m hurdles later in the day. His teammate, Shaquille Lowe, who is the second best in the class, will join him and both are expected to move on to the final.

A lot of attention will be on the Class One 110m hurdles, as defending champion, DeJour Russell of Calabar, a key figure in their victory bid, has not competed in the event all season, as it was rumoured that he was injured. His presence will be important in Calabar’s victory march as in Pinnock and Akeem Cargill, KC has the top two in the events this season.

After his pulsating 800m run two weeks ago where he recorded an amazing 1:48.85 seconds, Enid Bennett High School’s Tyrice Taylor will take to the track in the preliminary round of the Boy’s Class One event at 5:40 p.m. The likes of Spot Valley High School’s Tyrese Reid, Calabar’s Kimar Farquharson, JC’s Dejaun Blackman, and KC’s Tarees Rhoden are all down to compete in first round action.

The females down for action today include the Edwin Allen trio of Kevona Davis and the Clayton twins. Preliminary round action for the Girls’ Class Three half lap will run off at 6:55 p.m. while Class Two will get under way at 7:50 p.m.