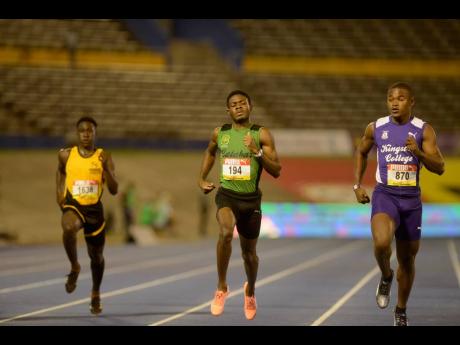 Shorn Hector
Calabar’s Christopher Taylor (centre) crosses the line in the Class One boys 200m heats ahead of Kingston College’s Oshane Peart at the ISSA/GraceKennedy Boys and Girls’ Athletics Championships at the National Stadium last night. Taylor clocked 21.69 seconds for the win.

The race for the Mortimer Geddes Trophy is expected to go down to the wire, but yesterday’s opening day of the ISSA/GraceKennedy Boys and Girls’ Athletics Championships showed little indication of the excitement to come as the major contenders quietly went about their business inside the National Stadium.

There are concerns, however, for embattled Calabar star Christopher Taylor, who seemed to suffer some discomfort while coming off the turn in his 200m prelim win in a time of 21.69 seconds.

The youngster could not follow up on his personal-best throw of 59.56m set at the Central Hurdles and Relays Championships in January and crashed out of yesterday’s event setting a distance of 44.57m.

The best throw on the day went to Kingston College’s (KC) Akeel Hanchard, who landed the javelin at a distance of 54.76m to advance to Saturday’s final. He was followed by Odayne Harris of Calabar High, who set a mark of 54.41 in Flight One.

In Flight Two, Calabar’s Shadane Adamson came out on top with a distance of 52.37m, ­followed by Clarendon College’s Adrian Williams, with 52.29m.

Day one of the 109th staging of the championships also included the running of the Class Three boys’ 100m hurdles, where JC’s Jayd’n Johnson clocked the fastest overall time with 13.52 seconds in heat two. KC’s Corporate Area champion, Amontae Wray, won heat one in 13.61 seconds, the second-fastest qualifying time. STETHS’s Allem Pinto won heat three in 13.72 seconds for third-fastest overall, and Ra’john Gray was the fourth-fastest overall, winning heat four in 13.88 seconds. Calabar’s Mickere Ohara, brother of former Champs standout Michael Ohara and an expected finalist in some quarters, was ejected from his heat after a false start.

Bellefield High School’s Tavaughn Martin had a dominant display in heat one of the Class Three boys’ 800m race, clocking an impressive 2:02.85 minutes to cruise into the next round. Martin came into Champs as this year’s favourite for the event.

Also through are KC’s Jaquan Coke, who won heat three in 2:04.13 minutes for the second-fastest time overall; St Jago’s Alex Taylor, finishing heat two in 2:08.28; his teammate, Nathaniel McLeod, who won heat five in 2:08.47 for fourth-fastest overall; and STETHS’s Rajawn Davis, who was fifth overall, winning heat four in 2:12.05 seconds.

Tyrice Taylor’s superb form throughout the season saw him winning at the Digicel Grand Prix final in a personal best of 1:48.85 minutes, just shy of the decades-old Champs record of 1:48.84, set way back in 1987 by Vere’s Sherwin Burgess. Many believe the eraser will be required this year. Taylor continued to make the Class One event look effortless yesterday, winning his heat in 1:55.64 minutes, almost three seconds better than second-best, Bridgeport High School’s David Thompson, 1:58.50.

Today’s action gets started at 8:30 a.m. with the Class Four girls’ long jump preliminary round. Thirty-five events will be contested today, including two boys’ finals in the long jump, which should see KC take the early lead in championship. These take place in classes one and two, with Pinnock, Kerr and Buchanan contesting the former.

In the 200m prelims, JC’s Christopher Scott stamped his class with a 22.01-second win, the fastest time in the qualifiers, with Herbert Morrison’s Deandre Daley, 22.32, joining him in the sub-23-second club.