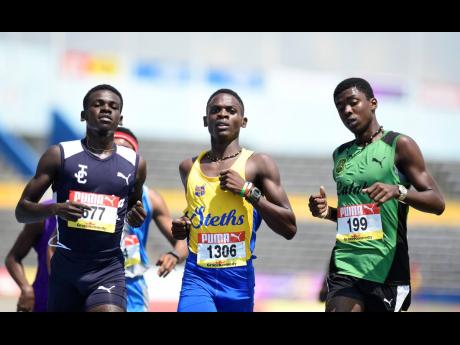 Gladstone Taylor
Fabian Campbell (left) of Jamaica College wins heat one of the class one boys 1500m event ahead of Kevroy Venson of Calabar (right) and Davian Gary of St Elizabeth Technical High at the ISSA/GraceKennedy Boys and Girls’ Athletics Championships at the National Stadium in Kingston on Wednesday March 27, 2019.

Calabar’s duo of Kevroy Venson and Kimar Farquharson eased into the final of the boys Class One 1500m on today’s second day of the ISSA/GraceKennedy Boys and Girls Athletics Championships at the National Stadium.

Venson, who won the event in Class Two last year, clocked a comfortable 4:04.45 seconds to finish a close second behind Jamaica College’s Fabian Campbell who won in 4:04.42 seconds.

Farquharson, who was a third place finisher in the event in Class One last year, cemented his spot in the final after ended third in his heat in 4:06.25 seconds.

Kingston College’s twin Giovouni and Gianni Henry lead all qualifiers for the final of the Boys Class Two 1500m event after winning their respective heats quite easily.

Giovouni, who was a fourth place finisher in the event last year, won his heat one in 4:17.04 seconds ahead of David Martin of Calabar 4:17.10 seconds. Gianni, a fifth finisher last season, advanced to the final after easing to 4:18.30 seconds in heat two.

Meanwhile on the girls' side, race favourite Rushane Dwyer from Edwin Allen leads all qualifiers into the final of the Class Two 800m final.

Dwyer, who have been having an outstanding season so far, recorded the fastest time of two as she crosses the finish line in 4:49.45 to win heat one.

Vere Technical’s Kris-Ann Plummer was second in 4:50.32 seconds. Holmwood’s Samantha Pryce, who is expected to challenge Dwyer for the gold medal, won heat two in 4:52.09 seconds.

The finals will be contested on Friday.