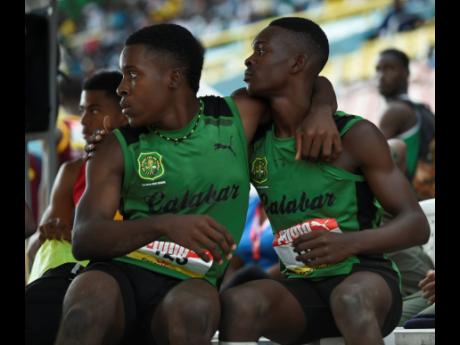 Gladstone Taylor
Luke Brown of Calabar (left) celebrates his seilver medal jump of 7.45m with team-mate Jordan Turner, who placed first in the Class Two boys long jump with a distance of 7.46m at the ISSA/GraceKennedy Boys and Girls Athletics Championships at the National Stadium in Kingston on Wednesday March 27, 2019.

The defending champions roared to life as Jordan Turner led home a Calabar one-two to take home the gold medal in the boys Class Two long jump at the ISSA/GraceKennedy Boys and Girls Athletics Championships at the National Stadium today.

Turner, who had a number of outstanding jumps during final, cut the sand with an impressive mark of 7.46m to finish ahead of his team-mate Luke Brown who secured the silver with a leap of 7.45m.

Kingston College’s Jaheim Cox took home the bronze medal with a mark of 7.17m, while his team-mate Bouwahjgie Nkrumie finished fourth with a best mark of 7.01m.

Calabar’s star sprinter Christopher Taylor brushed off his injury scare on Tuesday’s opening day in the 200m heats, as he returned to capture the opening heat of the boys Class One 400m in 48.40 seconds to book his spot in the semi-finals.

Taylor broke his stride and grimaced, as he came off the curve in the heat of 200m before recovering to win the event in 21.69 seconds to book his place in the semi-finals, leaving many to wonder if he would be able to continue at the championships. The Calabar team captain, however, showed enough in the 400m heats to ease the fears.

Medal hopefuls Antonio Watson from Petersfield, Jeremy Farr from Wolmer’s Boys and Evaldo Whitehorne from Calabar are all through to the semi-finals of the event.

On the girls' side, Hydel’s gold medal favourite Charokee Young is safely through to the semi-finals of the girls 400m after winning her heat easily in 55.31 second.

The stoutly-built Young is expected to be challenged strongly for the gold by Holmwood pair of Kavia Francis and Danaille Brisssett, who also secured their spots in the semi-finals of the event. The semi-finals will be run on Friday.