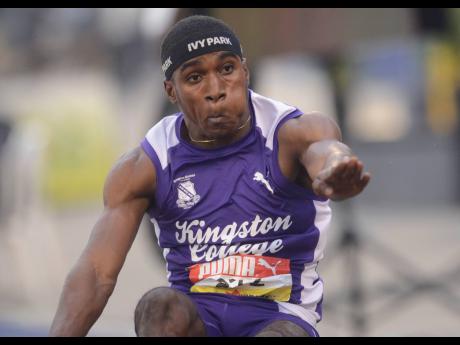 Shorn Hector
Shorn Hector/Photographer Wayne Pinnock of Kingston College on his way to setting a new record of 8.05 metres in the boys Class One long jump final at the ISSA/GraceKennedy Boys and Girls Athletics Championships on Wednesday.

Freshly-minted Class One boys long jump record-holder Wayne Pinnock from Kingston College (KC) said he was surprised that he broke the record in the event at the ISSA/GraceKennedy Boys and Girls Championships at the National Stadium.

Pinnock, who is the defending champion in the event, produced a series of outstanding jumps to retain his title in front of a fair sized crowd in the grandstand.

The 18-year-old produced an excellent mark of 8.05m on his third attempt to erase the previous mark of 7.93m, which was held by Leon Gordon from Vere Technical.

In fact, the talented athlete also broke the record on his second attempt when he leapt to 7.95m in the event.

Pinnock, who is the world Under-18 bronze medallist in the event, said he was very delighted with his performance.

“From (Tuesday) night, I had it on my mind, but I wasn’t on it like that,” said Pinnock. “I was really focusing and followed my coach’s instructions. I went out there and I broke the record and it’s a really great feeling for me,” he said.

With the Long Jump event now won, Pinnock now turns his attention to the Class One Boys 110m hurdles and he believes he can go faster than anyone has ever done in this event as well.

“Based on my training, I train hard, so I think I can pull off a next one (record),” he said.