Laurie Foster | A slap on the wrist 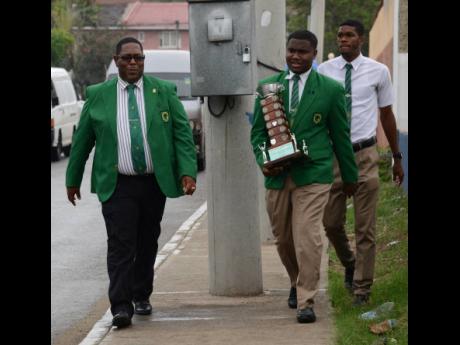 Ricardo Makyn
Then vice-principal of Calabar High Calvin Rowe, with head boy Rajay Maragh, walks with the Mortimer Geddes Trophy on March 16, 2017. Rowe is now the acting principal. The school has won the boys’ title at Champs for seven straight years.

Having listened to and read a collection of views surrounding the incident involving the two prominent Calabar High School athletes and the teacher who heads the Physics Department, it is difficult not to conclude that justice has not been served.

The school, in a press release, claims to have acted on the evidence that was made available. In the mind of the acting principal, there was nothing to substantiate a physical assault on the teacher or damage to his cell phone. However, the acting principal mentioned that one of the students admitted to “shoving the teacher’s phone from the face of his teammate”. One is left to ponder how that action could have been completed without a measure of assault on the teacher, who was holding the instrument.

The acting principal went on to say that the boys were suspended and that it was not within the purview of any other person to decide the type or severity of any punishment handed out to the alleged miscreants.

Thoughts from sources external to Calabar suggest that employing the disciplinary tenets of yesteryear would have achieved a different outcome. To this, we agree, but these are different times, and different methods should be employed when dealing with the youth of today. As a takeaway from all this, it should not be that a student is encouraged to display the sort of behaviour ascribed to these two students. That is what inevitably happens when the sanctions are out of sync with the crime. As the saying goes, ‘if you do the crime, you have to accept the time’, but it did not seem to be that way in this incident. The feeling from this corner is that the boys were let off the hook, based on what appears to have happened. They stand to be further rewarded when the expected medals are draped around their necks. This is not how it ought to be.

All schools, realistically or not, have dreams of doing well at Champs. It can pave the way to a successful future, both athletically and academically. No obstacle should be placed in students’ path to reduce the opportunities that are built into the system. It is the duty of administrators to ensure that means are employed to assist the athletes in maximising their talent. A clear message ought to have been sent. It should not be that they can display unseemly behaviour and simply receive a slap on the wrist. This is what seems to have happened in the instant case.

On this occasion, the school seemed to have overlooked its motto, ‘The Utmost for the Highest’.