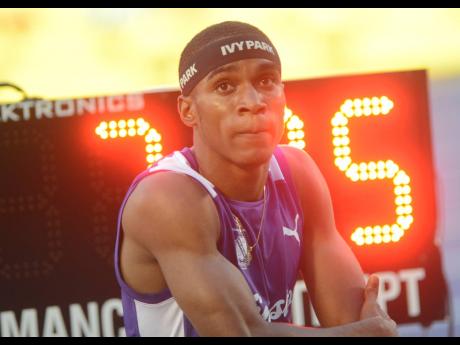 Whoever said lightning does not strike twice clearly has never met Wayne Pinnock. The 18-year-old Kingston College (KC) star set a record in the Class One Boys Long Jump not once, but twice, minutes apart, at the ISSA/GraceKennedy Boys and Girls’ Athletics Championships (Champs) at the National Stadium last night.

Leon Gordon’s (Vere) long-standing record of 7.93m from 1993 had proven too difficult a task for many over the years, but Pinnock made it seem effortless. With long confident strides, the youngster leaped 7.95m on his second attempt of the evening and made history. However, that was clearly not enough for him. He had his sights set on becoming the first athlete at Champs to travel 8m in the event.

Pinnock took off down the runway to the tune of rhythmic applause from a sizeable grandstand crowd. Those spectators erupted in delight when he made his impression in the sandpit. They waited and waited, Pinnock became teary-eyed with emotion and anxiety and when the display board confirmed the 8.05m mark, there was an eruption of emotion.

“From (Tuesday) night, I had it on my mind, but I wasn’t on it like that,” Pinnock told The Gleaner. “I was really focusing and followed my coach’s instructions. I went out there and I broke the record and it’s a really great feeling for me.”

Pinnock’s 8.05m is the best mark by an Under-20 athlete so far this year, and also the seventh best mark in the world so far.

KC’s Shacquille Lowe completed the quinella when his jump of 7.61m placed him second. St Elizabeth Technical High School’s (STETHS) Michael Buchanan finished third with a distance of 7.26m. Those were expected and much-welcomed 16 points for KC, especially after defending champions Calabar secured an unlikely one-two in the Class Two event earlier.

After both finals, KC are first on 27 points, followed by rivals Calabar on 16. Jamaica College (JC) are third on nine, STETHS fourth on six, Wolmer’s Boys are fifth on five, and St Jago sixth on four.

KC’s Arymanya Rodgers, returning from a leg injury he picked up in the ISSA/Digicel Manning Cup final last November, clearly in some discomfort, did not have a strong showing in the Boys Open 5000m event, but qualified for the final. His time of 16:14.11 minutes was the seventh best on the day, with the top two qualifying times coming from Kevroy Venson, 15:51.16, and his Calabar teammate Rivaldo Marshall, 16:07.43.

In Class Two, Calabar made no mistake, setting the fastest qualifying time, of 41.08 seconds. St Jago were next best, qualifiers with a time of 41.89 seconds

Today’s third day of competition will see the much-anticipated Class One Boys 100m preliminary round which gets started at 3:20 p.m. Earlier though, the Class Two Boys Shot Put gets going at 8:40 a.m. The Class Two Boys 400m hurdles get under way at 9:15 a.m., with their Class One counterparts taking the track at 9:35 a.m.