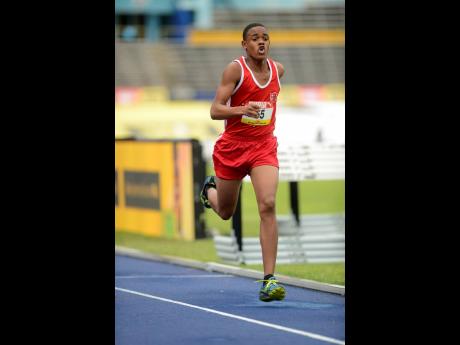 Shorn Hector
Tavaughn Martin of Bellefield High leaves the pack behind to win his heat of the boys’ Class Three 800m run during Day One of the ISSA/GraceKennedy Boys and Girls’ Athletics Championships held at the National Stadium in Kingston on Tuesday.

However, like many other lesser prominent high schools in Jamaica, Bellefield’s athletes are constantly faced with offers to join the more financially endowed high school track and field programmes across the country.

But head coach Dean Tomlin is not worried about these schools poaching his best youngsters.

“One of the things about Bellefield athletes over the years is that I created them,” Tomlin said. “Once you create them, they give you that loyalty. They don’t normally want to leave. I think most of them look at Kemoy, and (Shevan) Parkes, and (Tameka) Brooks and all the successes over the years. Those past athletes usually come back and let them know that ‘look, you’re in one of the best middle distance programmes in the country. Leaving makes no sense.’”

Tomlin said that although he was not worried about his athletes leaving, he still had to deal with the annoyance of recruiters talking to them privately to try to convince them to leave.

“Can I tell you that coaches even come to my training sessions and talk to my athletes at times,” he said. “But one of the things that I always tell them is to let them (coaches) talk to me. Once they come into the presence of the coach, they’re not going to come any further.

“It’s a strategy that I use. The loyalty that they developed for me, it’s like I’m a father figure to them. It’s not a programme with a lot of persons on the coaching staff. I’m the only person, so I’m like a father to them.”

Martin is one of the favourites to take the Class Three boys’ 800m title in tomorrow’s final at 4:25 p.m.