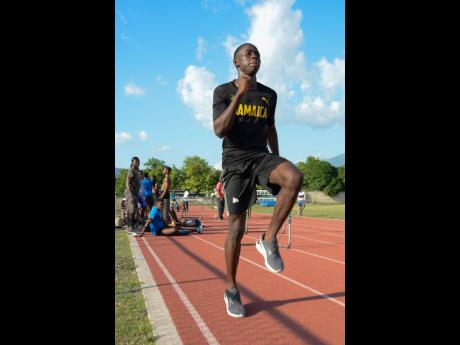 Defending boys’ champions, Calabar High will be hoping to make it eight wins in a row at the 2019 ISSA/GraceKennedy Boys and Girls’ Athletics Championships, and it is their very powerful Class One team that is expected to lead the way.

They will be led by the likes of De’Jour Russell, Michael Stephens and Christopher Taylor and cannot be matched on the track, especially in the sprints.

While the above-named athletes are no strangers to the championships because of their dominance over the years for the Red Hills Road-based institution, there is a new kid on the block who is making waves in their Class One team and he could be the man to beat in the 100 metres this year.

Oblique Seville, formerly of Holmwood Technical, joined the Calabar High family two years ago and sat out the championships last year based on the one-year transfer rule. At the recent John Wolmer Speed Fest Meet at the National Stadium, he had fans talking for a long period by virtue of a big Statement he made in landing the sprint double.

He has continued that impressive showing at Champs, leading all qualifiers into the 100m semi-finals after winning his heat yesterday in a time of 10.32 seconds to underline his status as a favourite for the gold medal.

Seville, who came to Calabar with a personal best of 10.89 seconds when he finished sixth in the Class Two 100 metres at Champs in 2017, is happy to be representing his new school.

“It is a good feeling being at Calabar training alongside some very fast athletes, and this has really helped me to improve as they push me in training,” said Seville, who stated that he was struggling to run fast at his previous school.

“I was not surprised because I put in the hard work and I could feel it in training, and I was ready for something special in competition because at Calabar, training alongside these guys is great motivation as it encourages one to be at the top of their game all the time,” he explained.

“The guys at Calabar here treat me really good because they are always looking out for me, telling me about the good things in training. Before I even came to Calabar, I was treated well as they saw me training and they liked my attitude, so it was really easy to fit in because I work really hard and I focus well on what I am doing,” he continued.

As he is competing in the 100 metres, Seville was asked if he felt pressured knowing about Calabar’s great tradition in schoolboy sprinting.

“I am not under any pressure to do well because of the great support I get from my fellow teammates and coaching staff, as they are always encouraging me, and I am very confident that I will deliver for the team and give them the points they need to win the championships,” said Seville.