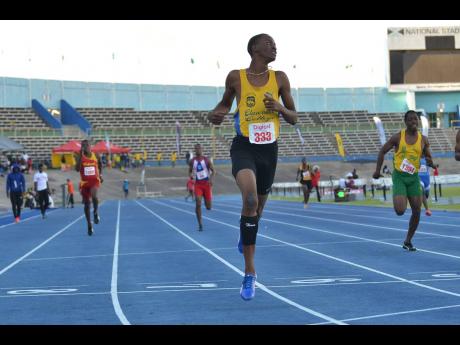 Clarendon College (CC) track and field coach Xavier Brown says that he believes that the electronic starting system being used at the ISSA/GraceKennedy Boys and Girls’ Athletics Championships is faulty.

However, he bears no ill feelings towards the meet organisers for an incident, which saw his athlete Rajay Morris initially disqualified from the preliminary round of the Class One Boys’ 100m on Thursday.

Morris was deemed to have false-started in his heat and ejected from the race, but CC filed an official appeal, saying that the athlete was distracted by noises while settling into his blocks.

His was one of several start-related issues at the championships this year.

“He couldn’t hear,” Brown explained. “He heard a little sound, and it put him off, and he couldn’t relax. But the monitor itself was giving problems.”

The appeal was successful, and Morris was allowed a run-off, by himself to qualify for the semi-final. With a time of 10.43 seconds, the 17-year-old was successful.

It was then asked by many why Morris had not run the heat proper under protest, but Brown said that the decision not to do so was not his.

“It’s not on me, though,” Brown told The Gleaner. “It’s the decision of the meet organisers to make him run the race after, and we had to work with it. We were comfortable, and we really didn’t have a problem running again to compete in the semi-final.”

Morris clocked a time of 10.73 seconds in Heat Two of the semi-final and missed out on a final berth after finishing fourth.

Brown said that although Morris had a much slower time in the semi-final, there were no worries about fatigue after the run-off after having to run an extra race.

“I’m only focused on my athletes, and not really on anything else for these Championships,” he said. “We’re trying to do the best for our athletes, and we try our best to make sure that everything is done so that they’re comfortable and ready to compete again.”

There have been many questions raised about the quality of officiating at Champs this year, especially with numerous controversial false-start decisions made at the start of Day Four in various classes of the sprint hurdles events.

However, senior starter Ludlow Watts defended the calls being made by the officials and stood by the equipment employed, noting that the apparatus was used and tested in the past at the National Senior Championships and an unnamed international meet last year.

“Ninety-nine per cent of those false starts yesterday (Thursday) and today (Friday), the gun went even before the start information system, so there are no doubts in our mind that the decisions were 100 per cent accurate and fair. (I stand by) our competence backed by our equipment, and as far as we know, we are doing the right things.

“People in the stands don’t know better, and many people in the media are making comments that are very false,” said Watts.