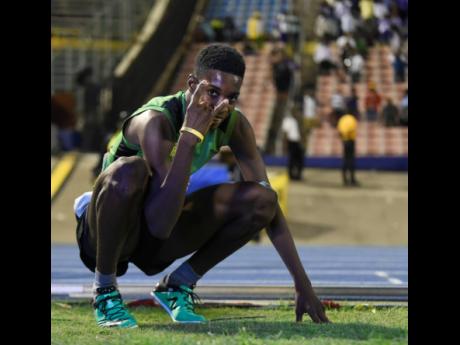 Gladstone Taylor
Rivaldo Marshall of Calabar celebrates his win in the 2000m steeplechase boys’ Open final at the ISSA/GraceKennedy Boys and Girls’ Athletics Championships at the National Stadium on Thursday.

Freshly minted Class One 2000m steeplechase champion Rivaldo Marshall has set his sights on leading home a Calabar one-two in the final of the boys’ 5000m at the National Stadium today.

Marshall, who won the steeplechase final comfortably in 6:07.22 seconds on Thursday, said he is very confident that he and teammate Kevroy Venson will take home the gold and silver medals for the Red Hills Road-based institution desperately in need of every single point as they look to rebound from a largely challenging first few days.

The pair have dominated the event this season and are heavy favourites to take the first two spots on the podium.

“We are well confident of taking home the gold and silver medals in the 5000m final. We really want to secure the maximum points for our school,” said Marshall.

“We have trained very hard for it, and so we are just going out there to do our best for our school in the event,” he added.

A.J. Sweeney from Edwin Allen was second in the steeplechase final behind Marshall with a time of 6:12.82 seconds, while third place went to Javon Francis of Bellefield in 6:13.10 seconds.

Marshall added that he was delighted with his victory and pointed to his work in the event throughout the season as the key behind his commanding performance.

“The race wasn’t difficult, but I was thinking on running a faster time, but I saw myself ahead of the rest of the field, and so I just focused on securing the nine points for my team,” he shared.