Holmwood will be back – Jones 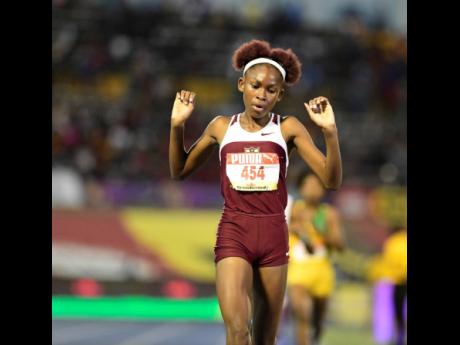 Gladstone Taylor
Jodyann Mitchell of Holmwood Technical wins the Class Three girls’ 1500m finals with a time of 4:47.07 at the ISSA/GraceKennedy Boys and Girls’ Athletics Championships at the National Stadium yesterday.

It has been five years since Holmwood Technical last won the girls’ title at the ISSA/GraceKennedy Boys and Girls’ Athletics Championship, and the wait has made the school as hungry as it was for its first title.

And while not conceding victory to defending champions Edwin Allen High School, long-time coach Dwight Jones says he and the rest of the coaching staff are planning a serious attack on the title in the coming years.

“It has been five years since we last won, and it makes us as hungry as we were when we wanted to win the first (title),” Jones said. “We have been planning to take back the title, and it will happen soon.”

He said: “We are still in this one because we still have a lot of finals to go, and we are going to fight.

“We have had some ups and downs, but this is Championship and anything can happen, so we have to stay ready and fight until the end.”

Holmwood, like defending champions Edwin Allen, have been nagged by injuries as Kishauna Wallace suffered a hamstring setback in the preliminary round of the 100m on Thursday.

“She felt something in the 100m heat Thursday. We have to find the next best person to come and fill the gap in the relay as she was expected to play a big part in that,” he said.

The Christiana-based school is currently out of the top three in the points standing, but they should move up the order today as they are expected to finish in podium positions in all three 400 metres and score heavily in the 800 metres.