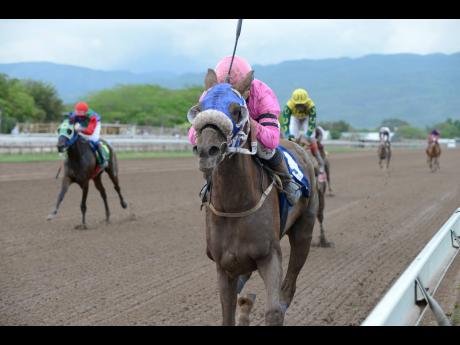 RUN THATCHER RUN turned back a determined challenge from United States-bred six-year-old SARATOGA SIGHT and a late flurry from rail-running MASTER OF HALL, passing his 2000 Guineas test by a neck in a driving finish.

Out for the second time in a week, after trainer Wayne DaCosta rushed the champion two-year-old of last season back into training, coming off a procedure to treat bucked shins, RUN THATCHER RUN got no favours from his 14 rivals in a truly run race at seven and a half furlongs.

JAMAI RAJA, an 86-1 shot, was ridden to lead from the gate, soon pressed by another outsider, 99-1 longshot, UNCLE VINNIE, the supposed rabbit for stablemate SARATOGA SIGHT, while Omar Walker settled RUN THATCHER RUN in third place off opening splits of 23.3 and 46.3.

As if on cue, SARATOGA SIGHT darted around rivals under Dane Nelson from his wide draw to join RUN THATCHER RUN three furlongs out, hoping to catch Walker flat-footed. However, the six-time former champion jockey was alert and made his move simultaneously as the two favourites swung into the lane abreast each other.

As the pair straightened, SARATOGA SIGHT beared down on RUN THATCHER RUN, sparking a brief bumping match in mid-track. With both horses locked in a prolonged stretch battle, RUN THATCHER RUN started inching away, but was soon faced with far-striding MASTER OF HALL closing on the inner inside the last quarter furlong.

With SARATOGA SIGHT still looming large on his outside and MASTER OF HALL inside, Walker cautiously resorted to a hand ride, warding off twin challenges with the margins being a neck by three-quarter length at the end.

“I liked how he performed today,” said the leading rider, who moved his tally to 23, six clear of apprentice Christopher Mamdeen, after earlier booting home back-to-back winners – LEGALITY for Philip Feanny and the first of two wins for DaCosta, MADAM SECRETARY in the sixth.

“He is not a 100 per cent as yet, but this race will get him there. He ran a nice race today and was lighter in his body,” added Walker, who was aboard the unbeaten colt last week when he made his seasonal debut with a workmanlike victory at six furlongs.

Meanwhile, with the 2000 Guineas set for Sunday, April 14, DaCosta said he was pleased with RUN THATCHER RUN’s gutsy performance.

“He ran a courageous race. The instruction was to sit off the pace and make his move. He is not a quitter. He is a fighter,” he said.

Trainer Carl Anderson also saddled two winners on the 10-race card, jolting punters in the opening event with 39-1 outsider, RUNDAZZLE, with five-time former champion jockey, Trevor Simpson, which caught bettors by surprise as most had missed an announcement over the public address system that the rider listed on the official programme, Tadious Simpson, Trevor’s son, was indeed an error.

Anderson rounded off his two-timer on a more quiet note with even-money favourite, SUNSHINE CAT, the first of two winners for last year’s champion rider, Anthony Thomas, who returned to make all with ALEXANDRA in the eighth.