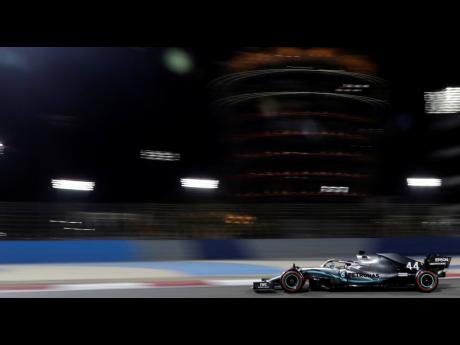 Hassan Ammar
Mercedes driver Lewis Hamilton of Britain in action during the Baharain Formula One Grand Prix at the Bahrain International Circuit in Sakhir, Bahrain, yesterday.

Lewis Hamilton’s surprise win for Mercedes at the Bahrain Grand Prix yesterday was the latest present from rival Ferrari, served on a silver plate and wrapped with a red ribbon.

Hamilton won at a canter despite the Silver Arrows lagging behind the red-and-black Ferraris for most of the race.

First, Sebastian Vettel imploded under ­pressure from Hamilton, spiralling out of contention some 20 laps from the end as the pair of five-time Formula One champions fought for what seemed like ­second place.

Then it got even worse for Ferrari as race leader Charles Leclerc’s engine started losing power.

“(It was) just a loss of power, completely,” Leclerc said. “There were no signs before.”

It was the F1 equivalent of an open-goal in football for Hamilton, who took full advantage before getting a post-race hug from former Manchester United and England star David Beckham, who waved the chequered flag on Hamilton’s 74th career win. Only seven-time F1 champion Michael Schumacher has more with 91.

Leclerc finished third behind Valtteri Bottas as Mercedes somehow clinched a second straight one-two from two races, having been slower than Ferrari in preseason testing and in Bahrain. Ferrari looked in ominous form after dominating every practice session and every section of qualifying on the 5.4-kilometre (3.3-mile) desert circuit.

“We were lucky. Ferrari outperformed us from the get-go,” Hamilton said. “It definitely feels weird. But what can you do? You can’t deny yourself (victory).”