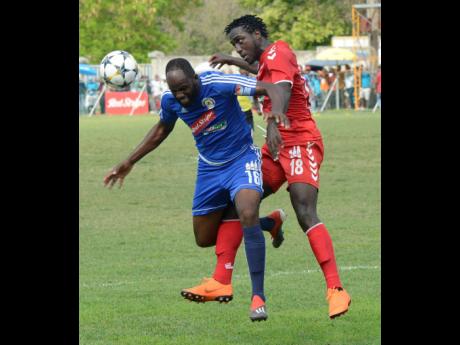 Francois Swaby’s 27th-minute penalty helped newcomers Mount Pleasant create history as they ­became the first promoted team to make the semi-finals of the Red Stripe Premier League (RSPL) after a 1-0 win over UWI in the second leg of their two-leg ­quarter-finals at Drax Hall yesterday for a 3-2 aggregate win.

“My team expects me to score,” Swaby said. “They look up to me. I’m the striker, so whenever an opportunity presents itself, I have to take it.

“I feel good finding two goals in the quarter-final, but I must say congrats to my team. It was a team effort, and we did well.”

UWI survived Mount Pleasant’s early onslaught and a couple of close chances before settling into their game and starting to look threatening.

But Mount Pleasant got the early breakthrough they desired when Benbow’s effort was stopped by a defender’s hand inside the area just after the half-hour mark, and Swaby dispatched the resulting penalty into the roof of the net.

The home team created another great opportunity towards the end of the half, but Kemar Bennett was unable to take advantage.

After the break, Mount Pleasant sat behind the ball in numbers and looked to hit UWI on the counter.

Despite having a lot of possession, UWI could find no way through the Mount Pleasant defence.

Mount Pleasant soon started to create openings on the break but failed to make use of the few good chances that came their way.

UWI threw everything forward for the last 10 minutes but could find no clear path through on goal, although Xavean Virgo had to clear off the line as UWI tried to scramble one home four minutes from time.

Mount Pleasant assistant coach Nigel Stewart said that it was a tough encounter but they did enough to make it across the line.

“It was tough, and we knew UWI would give us a good game, but we stuck to the task because we knew it was going to be difficult,” he said.

UWI coach Andrew Peart said it was always going to be hard after going behind.

“The key today was that we went behind, and we found it hard to get that goal back,” he said.

The RSPL debutants will now face defending champions Portmore in the semi-finals.