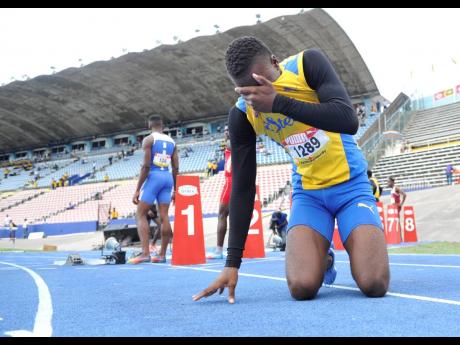 Shorn Hector
Michael Buchanan of St Elizabeth Technical High School is distraught after being ejected from the Class One boys’ 110m hurdles for a false start on Day Four of the ISSA/GraceKennedy Boys and Girls’ Athletics Championships at the National Stadium on Friday.

The universally notorious and absolutely cruel and unreasonable zero tolerance one false start rule in the sport of athletics, which dictates the expulsion of competitors for a single starting infringement, was brought squarely back into focus again at the just concluded ISSA/GraceKennedy Boys and Girls’ Athletics Championships (Champs).

The current version of the rule, which was implemented in 2009 to replace the previous rule that allowed one false start to the field, has been condemned by almost all stakeholders of the sport, except those in the governing body. This rule basically defies reasonable and natural justice relative to other ­disciplines of athletics, and other sports outside of athletics. It was at its worst during this year’s Champs, as one colleague aptly referred to this year’s event as the ’False Champs’.

The reasons posited for initially introducing this rule was to satisfy television requirements of ­having more uninterrupted sporting action. On the technical side, the ­explanation was to prevent ­sprinters with relatively slow starts from ­deliberately false starting in an effort to affect their rivals with fast starts, thus the need to level the playing field by allowing no false starts.

In terms of the stated intent of keeping the action going, that certainly was not achieved at the National Stadium during the high profile championships. There seemed to be an inordinate amount of deliberate false starts by athletes who were registered for both sprints, but for one reason or another, decided only to compete in one, but were mandated to turn up for both or face expulsion from the championships. This is another related rule that makes no sense. It ought to be quite simple: if an athlete fails to turn up for an event, he or she has forfeited the right to compete in that particular event, end of matter.

In terms of the experts manning the system, despite the belligerence of chief starter Ludlow Watts, the officials, too, must shoulder a lot of the blame for what bordered on becoming a spoilt spectacle. Watts, in his own forthright way, sought to defend every decision of his team, asserting that their decisions are almost always 100 per cent right – which obviously cannot be correct, since there were so many discrepancies which led to actual reversals and reruns. Lost on Watts was also the fact that Champs is still an amateur high-school event with young student athletes ending up as victims of this extreme rule.

It is in that context that the ­absolute zero tolerance of the starters seemed so cruel and insensitive. Unknown to most, the starters are allowed the discretionary powers to reinstate any athlete they deem deserving. For the thousands of fans inside the stadium, and the millions watching in television land, there were just too many close and marginal calls thrown up by the first-time use of this particular starting system at Champs, with its extremities that many of these young athletes were never before exposed to.

With all the pre-Champs drama fuelling the anticipated ­spectacle of Champs 2019, the event ­bordered on failure to live up to all those expectations, due in part to the perceived injustices by ­starting discrepancies. The cumulative damage to the hearts and souls of some of our potential young stars might never be known.

There are also worrying ­elements of hypocrisy and glaring double standard highlighted by this particular Champs experience, in the way we treat our young ­people compared to our adult stars. I remember vividly at the national senior level some years ago, on more than one occasion, some of our then big superstars of the sport blatantly false starting, but ­somehow in those moments, the starters conveniently ­conjured up the common sense to turn a blind eye. Sadly, all of that common sense went ­missing at Champs 2019, which all but descended into a ‘false start fiasco’.