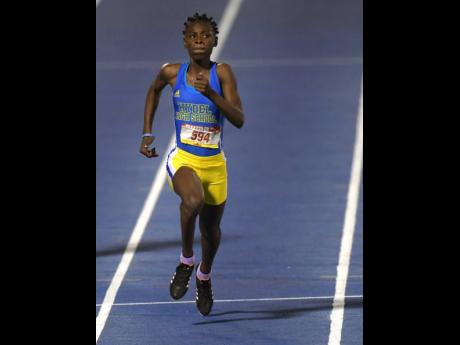 Hydel High School’s Alana Reid was disappointed with her finish in the Class Three girls’ 200m at the ISSA/GraceKennedy Boys and Girls’ Athletics Championships at the National Stadium on Saturday.

Despite a performance that saw her finish seventh in 25.23 seconds, she is unfazed and is still confident that she has a bright career in track and field. However, she knows that heading into her second year in Class Three, there is some amount of pressure on her to do better than this season.

“I’m not in a good state, but if I believe, I can achieve,” she told The Gleaner. “I know that next year, going into second-year [Class] Three, I’ll be bigger and better.

Reid believes that with the ­guidance and motivation from coaches Corey Bennett and John Mair, she will be able to hit her ­targets next season.

“Working with Coach Bennett is really nice,” she said. “He motivates you. He helps you to push forward for your dreams, and he helps you out wherever you need it, and he’s a wonderful coach. Mr Mair has moved me a lot. He and my mother are my biggest motivators, but if it wasn’t for God, I wouldn’t be here right now.”

Reid was a finalist in both the 100m and 200m at Champs on Friday and Saturday, respectively.