No letting up! - Edwin Allen plan Champs dominance for years to come 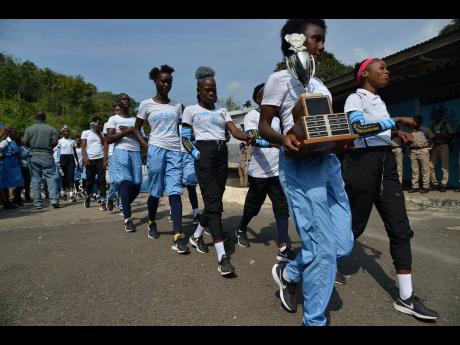 Kenyon Hemans
Edwin Allen High School’s track and field team celebrates winning the ISSA/GraceKennedy Girls’ Championships on the school grounds in Frankfield, Clarendon, yesterday. This was the school’s sixth consecutive hold on the trophy and their seventh overall. 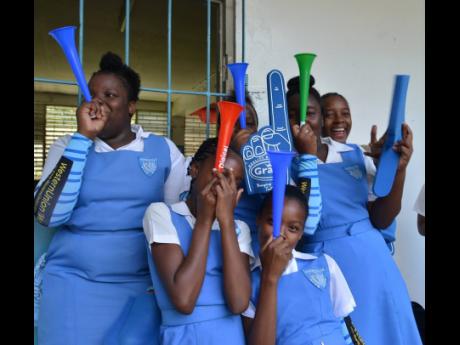 FOR three hours, it was sheer jubilation on the campus of Edwin Allen High School in Frankfield, Clarendon, as students, teachers, friends and members of the community revelled in victory after winning their seventh female title at the ISSA/GraceKennedy Boys and Girls’ Athletics Championships on Saturday.

The school wrapped up a narrow seven-point win as the Michael Dyke-coached team scored 291 points to Hydel High School’s 284.

A full schoolyard came alive by the blowing of horns, vuvuzelas and whistles as music bellowed in the background to the delight of all.

Several teachers set the pace for the proceedings by singing gospel songs before the principal of the institution for the past 12 years, Everton Walters, took to the stage.

“We are champions!” he declared to thunderous applause from fans. “Coming into these championships, we had no doubt we would have won as our girls are the best in the world.

“The girls are deserving of this victory as they are dedicated and committed. Head coach Mr Michael Dyke and his support staff are strategists, as they are hard-working and committed to the task. They do not enjoy holidays as they train around the clock, and today, the results speak for themselves,” he continued.

About 10:30 a.m., the biggest cheer came when members of the winning team were introduced to the fans. Led by skipper Aneisha Ingram, with the winning trophy tucked under her arm and her teammates walking alongside her, the fans erupted in cheers for the team. Walters spoke highly of the entire team, while singling out Kevona Davis and the Clayton twins.

“I am quite elated with our sprint queen, Kevona, as Ms Davis is destined for greatness, and she is just awesome,” he said. “Also, the performance from the Clayton sisters, Tia and Tina, they were quite scintillating, blowing away everyone on the track. Indeed, it was a sizzling championships for Edwin Allen.”

The principal did not leave the male team out of the celebration as they were called onstage alongside the female team.” We must also commend our male team as they were awesome, as they were placed ninth out of 130 teams,” he said.

Captain Ingram thanked all for their support.

“I must say a big thanks to all of you who have supported the team over the years, and I can assure you that Edwin Allen will continue to win for years to come,” Ingram, who won the 2000m steeplechase in her final year of competition for the school, said.

Dyke, who got a resounding welcome, spoke about the performances of the team in the respective classes – those who contributed points first, then those who left with medals. “The girls are worthy champions and deserved this recognition,” Dyke said.

The celebration ended with members of the team taking part in a motorcade in two buses from the school campus to Trout Hall, to Spaldings, then back to the campus. Members of the communities waved and blew horns as the buses passed by.