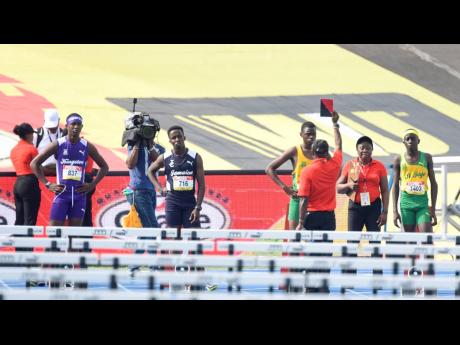 Gladstone Taylor
Officials show André Harris (second right) of St Jago High School a disqualification card for false starting in the Class Three Boys’ 100m hurdles at the ISSA/GraceKennedy Boys and Girls’ Athletics Championships at the The National Stadium in Kingston on Saturday.

The most amazing track and field meet for children in the world, also known as the ISSA/GraceKennedy Boys and Girls’ Athletic Championships (Champs), was concluded over the weekend at the National Stadium. The five-day event recorded the athletic achievements of Jamaican children that confirmed the often-stated truth: “Jamaica is the track and field capital of the world.” Every now and then, I heard the commentators mention “another world-leading age-group time”.

The names Akeera Nugent, Tia and Tina Clayton, Kevona Davis, and Wayne Pinnock, will be Googled by track and field enthusiasts worldwide for the rest of this season at least. This event is growing in stature and is now at the stage where our Government and sponsors should realise the potential national benefit of this meet, which now rivals ANY track and field meet broadcast on radio and television.

The reported sponsorship tag of $100 million spent by GraceKennedy represents a fraction of the benefits that will be reaped by the sponsor. What is needed now is more money to improve the facilities and accommodation of the thousands of fans and interest groups already planning to be here for the next Champs.

I have listed the names of children, who in my opinion, were the main standouts of the meet, but if truth be told, every winner, and some losers, last week deserve a special mention when excellence is discussed. The published results are jaw dropping, and those who are researching to find out why Jamaicans are so athletically gifted should stop trying to find out why and just come, watch, record, and savour the crème de la crème of Jamaican children at play.

Kingston College (KC), whose recruitment of principal Dave Myrie from Wolmer’s Boys’ School, began the serious preparation for the victory achieved on Saturday, and the change of coach, just put the icing on the cake of what proved to be a record-breaking total and annihilation of their opponents.

After 10 years of trying, adjusting, and training, everything finally fell into place last week. And as for Edwin Allen and Hydel, can anyone who witnessed the battle for supremacy at Champs last week really wait for next March? Meticulous planning and execution by both schools and their support staff resulted in some pundits boldly stating on Saturday morning that “Edwin will lose”. The fact that they won against the spirited fightback of the Corey Bennett-coached girls from Hydel, proves that the motto of the victors of Boys’ Champs, KC, ‘The Brave May Fall But Never Yield’, applies to Edwin Allen as well.

CHANGES TO BE CONSIDERED

This week, radio, television, and the print media will review and revere the exploits of our children at Champs, but there are some changes that must be considered if we as a nation hope to continue to benefit from the performances witnessed last week.

The noise of the vuvuzuelas notwithstanding, there needs to be recognition by the relevant authorities that the starting blocks, particularly at the 400 metre start, are woefully inadequate.

Our children are just not separating the noise from the starter’s instructions and false starts abound. This can and must be addressed if we are to realistically believe that we can achieve the blessing of the world body to hold Diamond League and other important meets (IAAF World Relays) here in Jamaica. As regular writer, Glen Tucker has pointed out that the flurry of false starts in last week’s Champs MUST be reviewed and a real and tangible effort made to make adjustments not only to the equipment, but to the rule that disqualifies a child, who because of mistakes, bad mind of those nearby, stadium noise, or a twitch, false starts.

I am painfully aware that the false-start rule now in place was changed, in my opinion, as a response to sponsors’ claims that repeated false starts in international meets created havoc with broadcast time.

As world leaders in track and field, the suggestions of Glen Tucker, a featured columnist and former coach of Holmwood Technical High School, should be considered. No child below the age of 14 participating for the first time should be subject to disqualification due to the false-start rule. For all races of 400m and below, the first false start should count against the entire field, regardless of who commits it, and the second false start goes against the individual perpetrator. Video footage should be available to justify the decision to disqualify a competitor.

What a week we had last week! May Champs continue to develop and grow in stature! Congratulations to everyone who participated – athletes, coaches, and support staff of the schools entered, the volunteer officials, the fans, the vendors and the sponsors. Champs 2020 is just too far away.