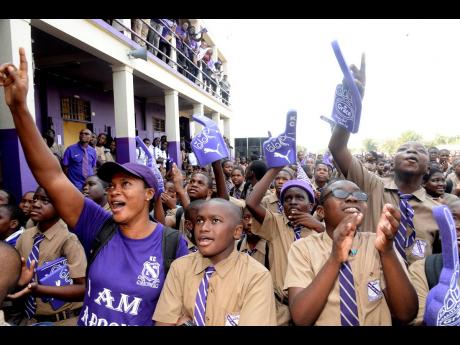 Lionel Rookwood
Jubilant Kingston College students at the celebration for the ISSA/GraceKennedy Boys’ Athletics Championships victory on the school grounds on North Street in Kingston yesterday. 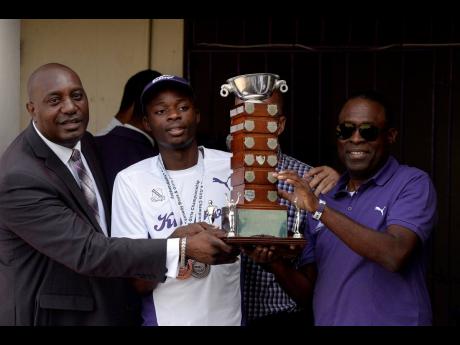 As Kingston College (KC) kick off what could be a week of celebration, having won the 2019 ISSA/GraceKennedy Boys’ Championships and being scheduled to play in TVJ’s Schools’ Challenge Quiz final tonight, chief executive officer of title sponsors, GraceKennedy, Don Wehby, is calling for businessmen in Jamaica to take note of how KC won their 32nd title.

KC tallied a record 395.5 points to end their 10-year wait to lift the Mortimer Geddes Trophy again, and Wehby said the boys from North Street Kingston executed a well-planned strategy.

“Congratulate Kingston College for winning the 2019 Boys’ Championship, [who] were most impressive by scoring the most points in history. What I saw on Saturday, any businessman in Jamaica would tell you that we have a lot to learn from Kingston College because it was a well-executed strategy,” Wehby said.

The GraceKennedy boss said that principal of KC, Dave Myrie, was once an employee at his company and, as such, Grace is aligned with the strategy applied by ‘The Purples’ to achieve what has been dubbed ‘Project 32’.

“Just for information, principal Dave Myrie used to work with us at GraceKennedy, so he has learned something there,” Wehby said with a chuckle.

Without revealing the strategy, Myrie said he was happy to have silenced KC’s critics.

“This morning is a great morning for Kingston College,” he said. “Many said that we couldn’t do it, and we have done it. Some said we would have lost by 100 points. Some said that we would have lost by 50 points, but we won. [Today], we play St Jago High School in the Schools’ Challenge Quiz final, and we expect to bring that home as well, so on Friday, we will have another the celebration, where we will be travelling around Kingston in a motorcade,” he explained.

Team captain Tarees Rhoden thanked his schoolmates for their patience in t heir wait to win the school’s 32nd title.

“After 10 years, the trophy is back at KC,” Rhoden said after presenting the Mortimer Geddes Trophy to the school population.

“Thank you guys for the support and for being an extra teammate. I want to thank my teachers, especially the science teachers.”

Head coach Leaford Grant was also grateful for the support the team received throughout the season.

“I want to thank the principal, the coaches and the people who worked behind the scenes,” he said.