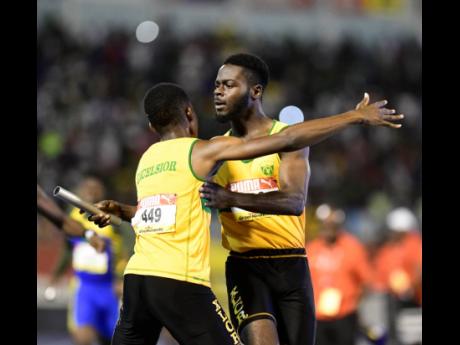 Gladstone Taylor
Excelsior’s Travis Williams (right) celebrates with teammate Demar Francis after anchoring his team to the gold medal in the 4x400m relay Open final at the ISSA/GraceKennedy Boys and Girls’ Athletics Championships at the National Stadium last Saturday.

When Travis Williams took the baton across the line for Excelsior High School’s 4x400 metres team at last week’s ISSA/GraceKennedy Boys and Girls’ Athletics Championships, it ended a 51-year wait for a win in the four-lap relay. David Riley, Excelsior’s head coach, says he knew he had a high-calibre team a year ago.

Riley explained that the meet schedule has prevented him from fielding his best 4x400m team for several years but that he was thrilled that his team was able to deliver this time around.

“This year, we were able to, but the last two years, it’s been difficult because of the change in schedule, where the 200 metres Class One boys’ is only 30 minutes from the 4x400m prelims,” Riley said. “So because our top sprinters are very useful for us over the 400m journey, we’ve always not been able to get that done.”

Excelsior did reach the final in 2017.

“I actually took a risk with Andel Miller, who I had given instructions to just finish second in his semi-­final of the 200m and then just to come over, walk back to the finish line, and run a leg of the 4x400m,” he recalled.

This year, that problem was averted. Francis and Williams ran only the Cass One 400m, with Francis reaching the final and Archer and Campbell competing in the 400 hurdles.

With split times of 47.8, 47.3, 48.9, and 46.9 seconds, respectively, Francis, Archer, Campbell and Williams completed a victory that had been predicted by Excelsior track and field patriarch Desmond Shakespeare.

“Since last year, I kept telling them that they could run 3.10 [minutes] this year, and I kept ­telling everybody who would hear me, including my former ­teammates”, said Shakespeare.

Once the stick reached Williams, Shakespeare grew confident even though Kingston College had pulled into contention.

“For me, I don’t know what Coach Riley is thinking, but for me, I wouldn’t be surprised if they go 3.08 [minutes] or thereabouts, or even quicker,” the 1968 Excelsior team captain said.

Riley put the win into perspective.

“From my standpoint, there are two things you can do in a ­championship. You can either win the whole thing, or you win the last race, you know, and so us winning the last race is very special and memorable, and it’s great to have created memories,” said Riley.

By way of example, he added, “One person told me that if the race was any longer, her bed would have been broken down because she watched the race on her bed and she was just jumping up and down, and good thing it wasn’t any longer.”