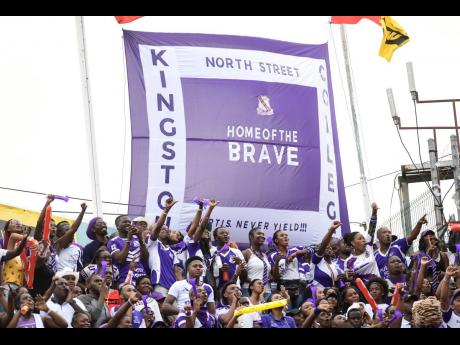 Gladstone Taylor
A section of the Kingston College support celebrate in the stands during the ISSA/GraceKennedy Boys and Girls’ Athletics Championships at the National Stadium on Saturday, March 30, 2019.

Another ISSA/GraceKennedy Boys and Girls’ Athletics Championships has come and gone. It has churned out the usual plethora of talent that speaks in eloquent terms to the wholesome image that the country has created for itself on the global stage. Given the dictum, “Uneasy lies the head that wears the crown,” there is the ever-present factor as to how can this be maintained.

A salient point in all this excellence is the preparation of the athletes for the intense competition that bidding for Champs glory entails. Tributes are in order for the cadre of coaches who tend and give nurture to the athletes placed under their care and bring them to the big party in the state of readiness which was on display during the five-day event. There were a number of individual coaches who can lay claim to being at the top rung of that ladder. With the constant fear of being heavily criticised for the choices, Foster’s Fairplay mentions the ones that come to mind.

The Hydel High School programme, headed by coach Corey Bennett with the assistance, this year, of Olympian John Mair, has been producing female sprinting quality from it first came under public scrutiny. As far as Championships honours are concerned, there has been an unceasing closing of the gap on the schools of longer standing, which is highly indicative of the efforts and resources injected by principal and founder, Hyacinth Bennett, who is also the mother of the head coach. What they have managed to do with 100m winner, Ashanti Moore, is nothing short of phenomenal. This girl was up to last season a heptathlete. This year, she has, in conjunction with the expertise of the coaches, been transformed into an 11.17 sprinter. With proper guidance, mentorship and focus, she may one day rule the global roost in the event. There are those who will argue that it is early days yet. This is quite acceptable, but surely they should agree that it is an extremely bright beginning on the path that is essential to attain the lofty heights that are predicted. Great job, coaches.

Then out of Calabar High School came Kimar Farquharson, a second year Class One athlete, who finally lowered the 32-year-old 800m record from 1:48.84 to 1:48.67. This was a truly remarkable feat, especially with the negative tales swirling at his school about top athlete indiscipline and disrespect to a senior staff member. Again, the coaching staff, stage-managed by the guru himself, Michael Clarke, is deserving of high commendation for keeping his feet grounded away from the distraction. He had stopped in the final stages of the event at the Digicel Grand Prix at the G.C. Foster College, and the likely confidence fallout from that, could have been added pressure, which also had to be conquered.

How can any analysis of the coaches, who showed off their wares with remarkable distinction at Champs, be complete without mention of the long-serving and highly productive Michael Dyke of Edwin Allen High. He first was respected for his ability to produce middle distance athletes in Delmore Delevante and Alwyn Sappleton. Now that he is synonymous with the girls programme, the assembly line is of infinitely more significance. Over the last three years, and emphasised at Champs 2019, Kevona Davis and the 14-year-old Clayton twins, Tina and Tia, have sparkled. These girls are high in quality and they should be recipients of all the support that can be generated. Tina registered times of 11.27 and 23.44, and those speak for themselves.

The challenges are well known but the governing body, the Jamaica Athletics Administrative Association (JAAA), needs to step in and give support to coaches, like Dyke, who have demonstrated that they are able to bring athletes of this quality to the fore.

Come on, JAAA, if you are not aware, Champs 2019 has produced more work for you to do.

All that said, kudos to the Kingston College faculty of coaches who had a plan that escaped all the pre-Champs pundits who were willing to wager that top honours would have gone elsewhere. The points tally, just shy of 400, was resounding.