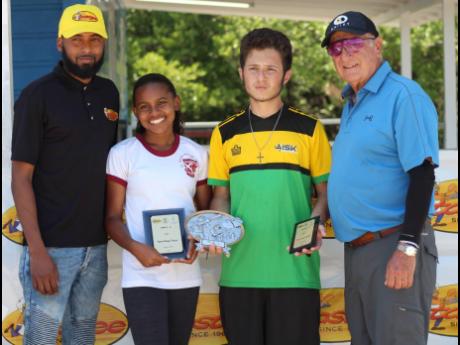 At the end of the main event of the 50-bird shoot, David Wong topped all the shooters with a score of 49. Four other shooters shot 48. They were Peter Mahfood, Roman Tavares-Finson, Cameron Pang Sang, and Cody Delisser. Danzell Knight was one shot behind on 47. Their scores qualified them for the ‘Super Six’.

The shooters with the top six scores were then engaged in a ‘Super Six’ shoot-off of 18 birds from three stations.

In the first round, Roman Tavares-Finson bagged the most birds – 5 of 6 – to take the lead and move to 53. David Wong and Danzell Knight ended the round with the lowest score of 51. The second round was tense with only Peter Mahfood getting all 6 birds to take the lead (58). Pang Sang and Tavares-Finson were just one bird behind on 57 each. The third of the three rounds saw Cody Delisser and Knight shooting a perfect 6 from 6, while Mahfood though bagging 5, ended on 63 to take the championship.

An overjoyed Peter Mahfood was thrilled his hard work materialised in another win.

“It feels just as great as last year. It’s my second tournament that I have won, and I am very happy. I am very glad because I have put in the work, I have put in the effort, I put in the practice, and it’s all great to see that it’s paying off. I hope I can continue to do this next year and the year after,” Mahfood said.

In the school section of the competition, the winner was decided based on the scores of the top three shooters.

Hillel copped the school section as their three shooters – captain Cameron Pang Sang and Roman Tavares-Finson, both shot 48, while Jonathan Ralston shot 46 for a school total of 142 points.

American International School of Kingston (AISK) took the runner-up spot after posting 137 points on the back of Peter Mahfood, 48, Danzell Knight, 47, and Mark Desnoes, 42. Campion with 132 points ended in the third position. Their three shooters – Joshua Lym, Richard Todd, and Amir Azan picked off 44 birds each.

Cameron Pang Sang, captain of champion school Hillel Academy, credited the hard work by the individuals on the team for their win. He said that even though the other teams get closer every year, his team also gets better by constantly practising and working at their game. Just under 50 young gunners from 12 schools battled for top honours in nine shooting categories. The top shooters in the various categories were:

Junior A – Cameron Pang Sang, Roman Tavares-Finson and Peter Mahfood who all shot 48. Their positions were decided based on a shoot-off among the three shooters.

Sub Junior A – David Wong 49 – he shot the highest individual score in the main section, and Richard Todd 44.

The girls’ section went to Savannah Miller, who shot 40 out of 50 birds, while Abigail McMaster 36 – took second place in the Girls’ A category.

Miller was happy with her win.

“It feels good and I would like to continue to defend it and do the best that I can. Sometimes I am not really focused on the position I come but how I improve my score.” she said.

The Girls B gunners shot a different course.

The top three shooters in the category were Neesa daCosta 47, Aliana McMaster 45 and Rachel Azan 40. National coach Khaleel Azan had high praises for all the shooters, who turned up for the tournament.

“Another excellent tournament. I am extremely pleased with the results, performance and the way the kids are maturing coming into competition.

“We try to teach them life lessons through the sport, and we are being successful. I think the fact that Hillel won, they have put a lot of work into it, and that is why they have maintained their superiority,” said Azan. The sponsors for the Tastee Inter-School Clay Challenge include title sponsor Tastee, Arts & Photo Expressions, Bigga, Hawkeye, Pure National Ice, St Mary’s, TinGrinners Club of Jamaica, Tru Juice, and WATA.