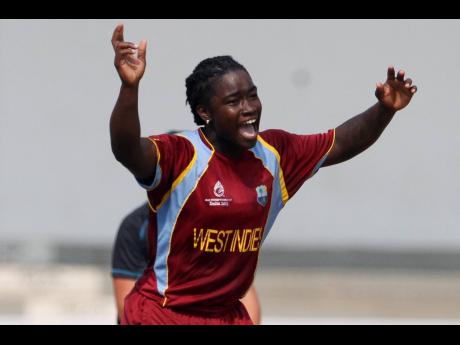 Dottin smashed six fours and two sixes in the top score of 43 not out from 28 balls, and Knight made 24 from 28 balls as the Barbadians successfully chased a modest target of 86 in the final match of the tournament under the lights at the Guyana National Stadium.

A strong bowling performance – led by the Windies Women pair of Hayley Matthews, the Barbados captain, and Shakera Selman – had helped the Barbadians restrict the Guyanese to 85 for seven from their allotment of 20 overs after the tournament hosts won the toss and decided to bat.

Matthews and Selman took two wickets apiece, but the visitors then limped to 28 for two in the ninth over before Dottin took charge of the chase with typically explosive batting to get the champions over the finish line with 23 balls remaining.

The victory meant that the Barbadians played unbeaten in the tournament and won both women’s titles this season, following their capture of the Super50 Cup just 10 days earlier in which they also did not lose a match.

Earlier, Windies Women pair of Chedean Nation, not out 63, and Chinelle Henry, not out 44, shared 90 – unbroken – for the fourth wicket to lead Jamaica to a seven-wicket victory over Trinidad and Tobago (T&T) in the opening match of the day’s triple-header.

Chasing 146 for victory, the Jamaicans were 56 for three in the 11th over before Nation hit five fours and two sixes from 48 balls and Henry struck five fours from 26 balls to stage a recovery and carry their side over the finish line with eight balls remaining, helping them clinch second place tied on nine points with T&T and Guyana but securing a superior net runrate.

Britney Cooper had led the way with 30, and Windies Women teammate Anisa Mohammed led three players that all got 26 as T&T, who finished third in the tournament, posted 145 for six off 20 overs after they were sent in to bat.

In the day’s other contest, Pearl Etienne was the pick of the Windward Islands bowlers, taking 3-14 from four overs as her side held on to clinch an 11-run victory over Leeward Islands and clinch fifth spot.

Stacy-Ann Adams and Windies Women’s leg-spinner Afy Fletcher, the Windwards captain, captured two wickets each to back up Etienne, as the Leewards were restricted to 104 for nine from their 20 overs, chasing 116 for victory.