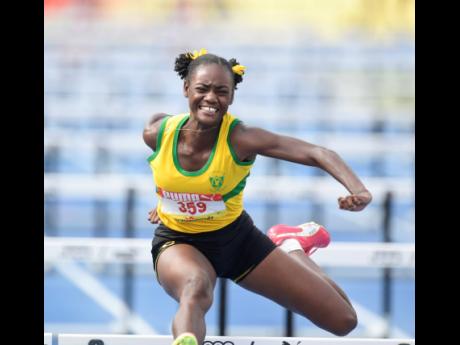 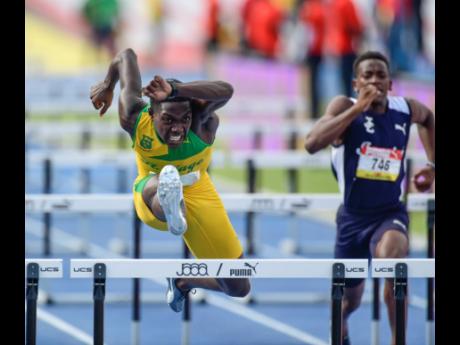 For the third year in a row, the ISSA/GraceKennedy Boys and Girls’ Athletics Championships’ Class Two 100-metre hurdles record has fallen.

“You can’t bank on hurdles, but when your top hurdler comes through, it’s great, and we continue to develop in that area”, Riley reviewed after Nugent had sped home in 12.91 seconds to rewrite the mark set last year by Ray-Donna Lee of Hydel High at 12.95.

“We do have the technical expertise, and it’s good that a lot more coaches are coaching the event and more athletes are being exposed,” he said of his Excelsior coaching staff and of Jamaica in general.

The victory marked a remarkable rise for Nugent, who had not won at Champs before. Confident after gaining a silver medal at last year’s Youth Olympics, Nugent had set a world Under-18 best of 12.87 seconds earlier this season. Before Saturday, her best Champs result was silver in the 2017 Class Three 800-metre hurdles behind St Jago’s Crystal Morrison.

Morrison was second to the Douglas Williams-coached Nugent in Saturday’s record race.

Reminded that Brittany Anderson, then of Vere Technical High School, set the record at 13.04 seconds in 2017, Riley agreed that the movement means Jamaica is on the move in the sprint hurdles.

“Yes, and most of these kids don’t have a full flight of hurdles to train with, you know, so hurdle endurance is not something that they practise a lot and so it’s all positive, all positive stuff.”

Riley pinpointed a surge in participation in hurdles by the boys.

“That just speaks to the number of persons that are participating and once you have numbers, you must have somebody rising to the top.”

The continued surge saw Vashaun Vascianna of St Jago High School lowering his own Class Two 110-metre hurdles record to 13.26 seconds, and Wayne Pinnock of Kingston College clipping the Class One record down to 13.06 seconds. In addition, all seven of the Boys and Girls’ Championships sprint-hurdling records were broken in 2017.

Each of the records for boys were shifted in 2018, with Pinnock’s fine performance advancing the Class One record for the third time in a row, as Calabar’s Dejour Russell had moved the record to 13.21 in 2017 and 13.10 seconds in 2018.