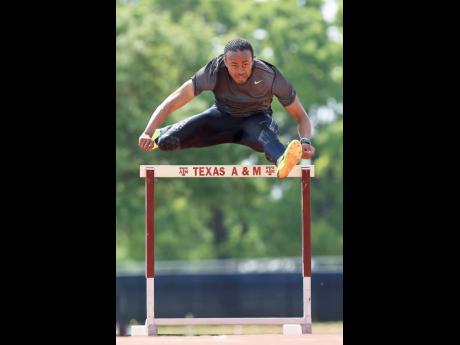 Merritt, the fastest man ever over the sprint hurdles, has generously donated to the IAAF Heritage Collection the pair of spikes that he wore while flying to the current 110m hurdles world record of 12.80 seconds in the IAAF Diamond League meeting in Brussels on 7 September 2012.

The spikes will be on public display in the IAAF Heritage Exhibition in the City Center Doha shopping mall for six months leading into and through the IAAF World Athletics Championships Doha 2019 (September 27 to Oct 6).

In a special ceremony on the evening of Thursday, April 18. IAAF president Sebastian Coe, together with Dahlan Al Hamad, IAAF vice-president and director general of the IAAF World Athletics Championships Doha 2019 Local Organising Committee, will officially open the world’s largest-ever display of athletics artefacts and memorabilia.

“When I heard about the IAAF Heritage project, I immediately knew I had to become involved and help promote track and field,” Merritt said. “I hope that the display of my world-record spikes in Doha will attract the attention of sports fans and the preservation of the shoes will assist the telling of tracks’ incredible story to future generations.”

The IAAF Heritage World Athletics Championships Exhibition will be open from Thursday, April 18, to Monday, October 7, 2019.