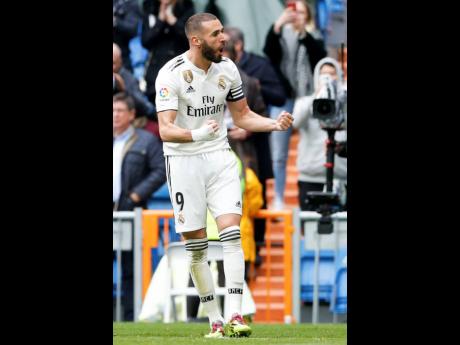 Karim Benzema scored twice as Real Madrid recovered from a poor first half to beat Eibar 2-1 at home in the Spanish league yesterday.

The French striker cancelled out an opening goal by Eibar’s Marc Cardona before grabbing the winner in the 81st minute.

Benzema has been Madrid’s best player in an otherwise disappointing season when most of his team-mates have played poorly. He has 26 goals in all competitions, including Madrid’s last four goals. He netted a late winner for a 3-2 victory over Huesca last weekend and scored in a 2-1 loss at Valencia on Wednesday.

Madrid were heading towards another defeat after a first half that Eibar dictated, helped by the hosts’ sloppy passing and lax defending.

After threatening with several dangerous crosses, Eibar went ahead five minutes before half-time after a slick build-up that involved four players.

José Angel Valdes exchanged passes with Marc Cucurella before finding Gonzalo Escalante in the area. Escalante then slid a pass through four Madrid defenders to the far post, where Cardona chipped it over sprawling goalkeeper Keylor Navas.

Madrid’s fed-up fans jeered their team at several moments in the first half, but most of their frustration was directed at Gareth Bale, who earned whistles for a poor shot, a bad pass, and for repeatedly being caught offside.

Eibar lost centre back Ivan Ramis to an apparent leg injury just before Benzema leveled in the 59th when he headed in a cross by Marco Asensio.

Madrid improved after the goal, and Benzema completed the turnaround when he outjumped his marker to head in a cross by substitute Toni Kroos.

Benzema had three chances to score a third goal, including one that hit the upright.