Jody Brown happy to give back 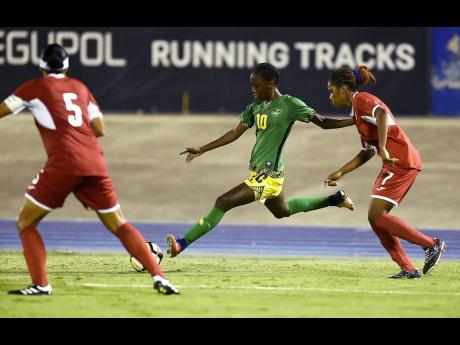 At age 16, Jody Brown, the youngest among Jamaica’s Reggae Girlz, has displayed a sense of maturity and humanitarianism that transcends her years. Evidence of this is her recent decision to donate 100 per cent of the prize money that complemented her recently won Victoria Mutual YOUTH Award to two organisations that played a part in developing the very skills that eventually earned her the recognition.

Brown, who secured the accolade at the 2018 RJRGLEANER Sports Foundation’s Sportsman and Sportswoman of the Year Awards in January, donated $100,000 to her alma mater, the Lime Hall Primary and Infant School in St Ann, and $150,000 to the St Ann Football Association (SAFA).

Speaking to The Gleaner recently, the teen was an image of gratitude as she recounted how her primary school facilitated her desire to play football and got her formally started in the sport.

“I always followed my brother to a playfield near my house every day to watch him and my friends, then one day, I took up a [pair of] shoes to go with them to play. And then from that day, I told my mom that I wanted to play for my primary school … . It was an all-boys team, [so] she spoke to the coach and told him that I wanted to play, and from there, I joined the team and played with the boys,” she said.

Brown said the boys on the team were nothing short of receptive towards her joining them on the pitch as the only girl. She was comfortable in the environment, too, as the boys on her team were people she had already been familiar with playing with informally in her community.

The forward also told The Gleaner how the sport took her from the learning institution to SAFA: “… when the coach of the St Ann women’s team (Danny Beckford) saw me, he called me to come to training, and I went and played matches with other girls. That’s when I started playing with girls,” she said.

“At St Ann (with the Under-15 parish team), I got the training I wanted because I would normally just get up and play, so I really developed my skills there,” she continued.

For Brown, as Lime Hall Primary and SAFA were the catapults that launched her to the national team, the decision to give back came naturally.

“[I donated] so they could continue to help other people that want to play the sport in Jamaica and also help the community provide an education, especially to the places that are not so fortunate,” she told Florida media recently.

Brown was selected for the Victoria Mutual YOUTH Award after a slew of achievements in 2018, including being named CONCACAF’s Best Young Player in the Women’s Championships, being selected among the CONCACAF Best XI team, and playing a significant role in the Girlz’s historic qualification for the FIFA Women’s World Cup later this year.

When asked about her frame of mind going into that competition, she said: “First, I put God first in everything I’m doing, and I think we will give our best. We are going out there to compete; we’re not going out there, because it’s our first time, to [just] enjoy the moment, but to come out with a good result… .”

However, in what some would call another show of maturity, Brown opted out of the Girlz’s trip to South Africa, where they just ended a one-week camp and have just come out of a friendly with the hosts, to attend to academic obligations at the Montverde Academy in Orlando, Florida. She also represents that school in football after winning a scholarship to the institution last year.

The Girlz came out of yesterday’s game with a 1-1 draw.