Experience was key for Waterhouse – Bent 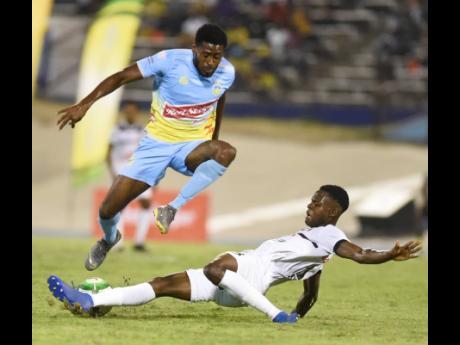 “It was a part of the overall tactic of the team to not allow Alex and company to feel comfortable because in their top form, they can be dangerous,” said Bent.

“Alex in the second-half had a few look-ins, Marsh did as well, but they didn’t capitalise and we are very pleased. The recovery work of our central defenders, (Nicholoy) Findlayson and Shawn Lawes, was excellent, they were covering each other whenever one was out of position, so the back line had each others’ back.”

Bent thought that his team’s experience was what made the difference in Monday’s contest and believes that their greater know-how will be a major advantage as they continue their push for a spot in the final next week Monday at the same venue.

“They may have gotten the better of us in the early season. They got a possible seven out of nine points from us, but when it comes to the semi-finals, it is a different level, and with the experience this Waterhouse team has, man-to-man, it is a big thrust versus Cavalier. Cavalier have experience, but they have young players and our experience brought us over the line last night (Monday), and I think it will even lead us into the final,” Bent continued.

“It was a good showing from the team. Although we had some rest from competition, we went to the training pitch to correct and fine-tune certain things and it paid dividends in the match. We are two goals up in a two-leg tie. We still have 90-plus minutes to play and we are not out of the woods yet, but things are looking positive for us,” he added.

Bent added that is the start they were hoping for, and now that they are in the driver’s seat, they are looking to drive home the advantage with another clinical display in the second leg.

“It’s a good start, and in any sport, whether track and field or otherwise, you need a good start. The start often sends the momentum going forward, so we are pleased we got two early goals in the first half and managed the game well in the second half. It was a good team performance overall,” he said.

“There is always room for improvement, so we will look at what we did right and try to improve, but we are looking to come next week and get the job done again. So it’s more of not taking our foot off the gas but continue pressing and try to press home the victory, so we can reach the final and solidify ourselves as one of the better-playing teams in this year’s RSPL,” Bent said.