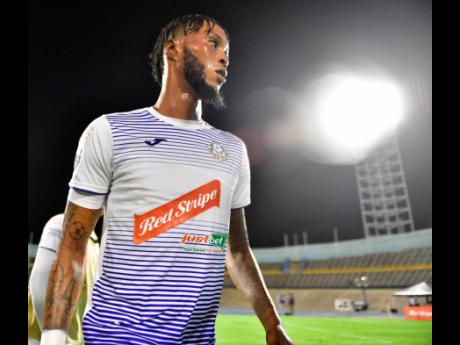 Portmore United’s head coach Shavar Thomas is well aware that the Red Stripe Premier League (RSPL) semi-final tie against Mount Pleasant is far from over, after engineering a 2-1 win over the newcomers at the National Stadium on Monday.

Thomas said the defending champions are prepared for another 90 minutes of tense pressure and are bracing for another frantic match-up against the St Ann-based team.

On Monday, Portmore striker Javon East gave his team the lead in the 43rd minute before Jourdaine Fletcher’s equaliser for Mount Pleasant. Roshane Sharpe, however, popped up at the back post to score a tap-in to give the St Catherine-based team the advantage going into next Monday’s second leg.

“First of all, we won, and that is important, that is key, that will boost the confidence of the team and give us more energy going into the second game to complete the task. But by no means do we think that this is over or it is going to be easier in the next game. Never,” said Thomas. “We are playing against a tough Mount Pleasant team, and this is the reason they are in the semis. They are a tough team to play against, tough to break down, and they don’t give up, so we will have to maintain our focus and concentration levels.”

Thomas credited his back line for withstanding waves of attack mounted by Mount Pleasant on the night.

Come the second leg next week, Thomas said his team is looking to put in a professional performance and consolidate their advantage.

“We are a professional group, we want to be professional, stay focused, stay concentrated and make our quality speak for itself,” he commented.