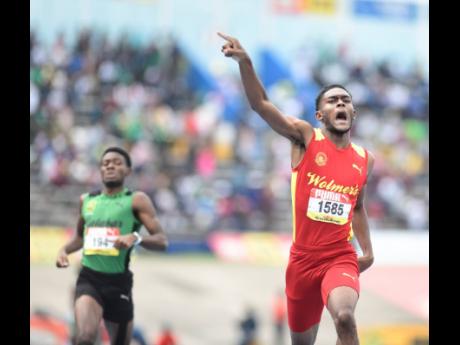 For me, the argument about the date of the Carifta Trials ended early. A week after Jeremy Farr of Wolmer’s bested the Class One 400-metre field at the ISSA/GraceKennedy Boys and Girls’ Athletics Championships in 45.65 seconds, he settled into his blocks for the first round of the Trials under-20 event. Listlessly, he drifted around the National Stadium track in 48.62 seconds.

He may have misunderstood the Trials qualifying requirements, but at Champs, just the previous week, he clocked 47.68 seconds in the first round, 46.52 in the semis and 45.65 in the final. People underestimate the physical and psychological effort championships extract from athletes, but sadly for Farr and any dreams he might have had about Carifta, his heavy-­legged Trials performance made everything clear.

The Trials ended on Sunday with a fine show in the sprint hurdles, and it makes one wonder. Farr and a subdued crew of 400-metre runners raced to qualify on Friday, less than a week after the last day of Champs. On Saturday night, Calabar’s Oblique Seville looked a fraction of the speedster who zipped to gold in the Champs Class One 100-metre final in 10.13 seconds on the previous Friday night.

The marque event of the season, the boys’ 800 metres showed a fall-off too. Promising Tyrese Taylor of Enid Bennett High reeled off times of 1 minute 48.85 seconds on March 16 and 1.48.91 two weeks later at Champs. Kimar Farquharson, the Calabar ace, chased past him at Champs to register a record of 1 minute 48.67 seconds. At the Trials, Taylor beat Farquharson, 1.49.75 to 1.50.33.

By Sunday afternoon, hurdlers Ackera Nugent of Excelsior and Rasheed Broadbell of St Jago looked nippy. Nugent stepped up to the under-20 100-metre hurdles and zoomed 13.26 seconds. Broadbell, a Class One bronze medallist, blazed a world-class under-20 110-metre time of 13.14 seconds.

It seems that rest was the difference.

A week after the historic 100th Champs, the 2010 Carifta team stuttered and struggled in Grand Cayman. Tired and besotted with sniffles and coughs, the team still dominated because of its all-round superiority.

When Jamaica returns to Cayman for Carifta next week, the same is likely to happen. As we all saw, the Trials did help select World under-20 champions Briana Williams and Kai Chang, long jump phenom, and World under-20 bronze medal winner Wayne Pinnock, Nugent, Broadbell and Seville.

Those who are calling for the results of Champs to guide the Carifta selections have to note one thing. Those Games are unusually late this season because the Easter weekend arrives late. That seems to have led to the unique staging of the Trials after Champs, but in time for Jamaica to file its team entries.

Given what we saw especially at Trials on Friday, it will be prudent to space the season out a bit more when Easter comes this late in the future. If that happens, the Trials can be placed where it always has been – before Champs. With an extra-late Easter, there should also be time to plug in some rest time between Champs and the Carifta Games.

Current circumstances have given ammunition to those who think Jamaica should skip the Carifta Games. However, Easter comes this late just once every seven or eight years. Moreover, the prime benefit of Carifta to Jamaica is the early experience of international championship competition and travel. Even now, long after the first Carifta Games in 1972, there is still nothing else like it.