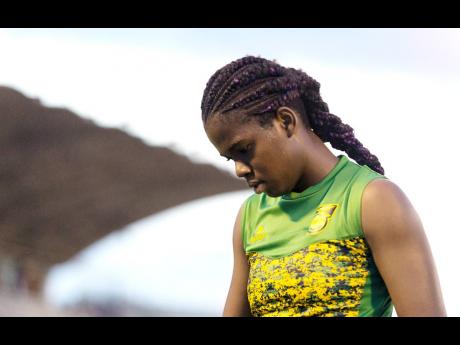 Head coach of Jamaica’s senior women’s team, Hue Menzies, is calling on other players to step up and take some of the pressure off top striker, Khadija ‘Bunny’ Shaw.

The hotshot striker bailed out the team with a fantastic solo effort in their 1-1 draw with South Africa in a friendly international in Durban on Sunday to continue her amazing goalscoring record for the Reggae Girlz.

Shaw netted 19 goals in 12 games to help the team qualify for this summer’s FIFA Women’s World Cup and has scored in all of Jamaica’s three friendlies since then, including two wins over Chile and the recent draw with South Africa.

In fact, the powerful striker has scored 24 of Jamaica’s 65 goals scored over the last 12 months and Menzies, while lauding the team’s performance in South Africa in particular, is concerned that his other attacking players are not pulling their weight.

“It (game) was good for us, the South Africans were more dominant, especially in attack. But when have a player like ‘Bunny’ Shaw things can change in a moment. We need to be able to do a bit more without depending on Bunny,” Menzies said.

“We expect ‘Bunny’ to bail us out some times, but the other players need to step up and take charge too, because she does what she does and that’s it. (Against South Africa) She picked up a ball from the half-line, ran through and scored - you can’t coach that,” Menzies added.

Menzies stated that the game also provided a good opportunity for the coaching staff to evaluate players and move closer to finalising the 23-member squad for the Women’s World Cup.

“It was a difficult game and we got a decent result. We brought in players we needed to evaluate, we didn’t bring in all the top players, but we still had some of the better ones. The game was an opportunity to evaluate and try to close out the roster for the World Cup and it gave us that opportunity,” Menzies said.

He also thought the overall atmosphere of the game was great for their preparation for the big tournament.

“It was a World Cup environment, you could easily call it game four of the World Cup. We got a great crowd, a great atmosphere and the South Africans treated us well. In the long run we got what we wanted out of the players, everything we did was very competitive, the training - every thing,” he said.

Meanwhile, Menzies, who noted that he has already decided on the make-up of the squad for the Women’s World Cup, also addressed concerns around winger Trudi Carter, who has been sidelined due to a knee injury for the past few months.

“She (Carter) just got back from rehab, they have just released her. She is up to play for Roma, so we are not worried about that. I have my final squad but I am not announcing that. The federation will do that once everything is in place,” Menzies confirmed, adding that the player is being monitored.