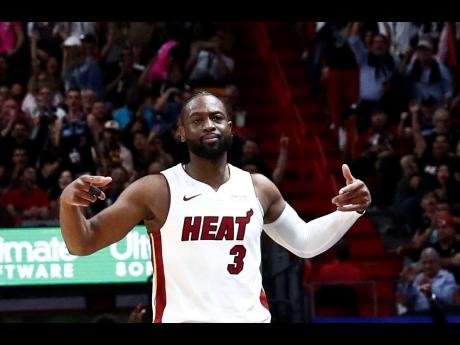 Brynn Anderson
Miami Heat guard Dwyane Wade in action during an NBA basketball game against the Philadelphia 76ers on Tuesday, April 9 in Miami.

All of his children were there. Former President Barack Obama sent a video, one of many tributes. Fans came early and stayed late, chanting his name. His wife slapped his backside in recognition of his making a 3-pointer. He crashed into John Legend and Chrissy Teigen, dousing them with a beverage. He slipped twice as he tried to make his signature leap on to a courtside table postgame.

Oh, and he started.

And he scored 30 points.

After 16 seasons as an NBA player, after three championships, an almost-annual spot in the All-Star Game, a scoring title, three franchises, four children, an Olympic gold medal and 161 teammates, the end is here. He is ready for whatever comes next.

“Hopefully, I created enough for this state, for the city, for the fans here, for the young kids here,” Wade said. “Hopefully, I can continue to be an inspiration for them, (after) being an individual who wasn’t given everything, who the odds were stacked against. Even when I made it to the NBA, still had odds stacked against me. But I continued to believe in myself. I continued to put my head down and worked.”

The work made him a star, and from there he became a legend – celebrated for what he’s done on and off the court.

His last game in Miami didn’t tip off until 7:50 p.m. Tributes started in the morning.

A Budweiser video showed Wade getting gifts from people – his mother, Jolinda Wade, and others, including Andrea Ghersi, the sister of slain teen Joaquin ‘Guac’ Oliver – in a nod to the way he’s exchanged jerseys with fellow players all season. Gatorade aired a video starring Legend , who sang a tribute to Wade’s No. 3. Heat President Pat Riley wrote a letter to Wade, published in the game programme, saying Wade will be loved “forever and for always”.

Ghersi gave Wade her brother’s jersey in the video, which was taped last week. The jersey – No. 3, of course – came with words scrawled in marker: “Please don’t forget my brother.”

There was a pregame series of events inside the arena. Wade addressed the crowd, thanking every teammate – even ones no longer on this season’s roster – by name. Students from Marjory Stoneman Douglas (MSD) High, where the February 14, 2018, massacre left 17 dead, performed the national anthem. It was fitting that the kids from MSD were there; the tragedy touched Wade deeply and Oliver, one of the victims, was buried in a Wade jersey.

The end of the anthem was drowned out by cheers. Wade’s face appeared on the video screens. The fans roared.

“Noooooooo,” Wade said. “Y’all are not about to make me cry before this game.”

His wife Gabrielle Union-Wade, Heat coach Erik Spoelstra, former Heat greats Shaquille O’Neal and LeBron James, Heat teammate Udonis Haslem and Riley narrated a five-minute pregame video. Hardly anyone was sitting. Even the 76ers stayed on the floor and watched, looking up the whole time. Zaire Wade, his oldest son, introduced his dad in the same way that his father taped his famous ‘From Robbins, Illinois’ commercial nearly 15 years ago.