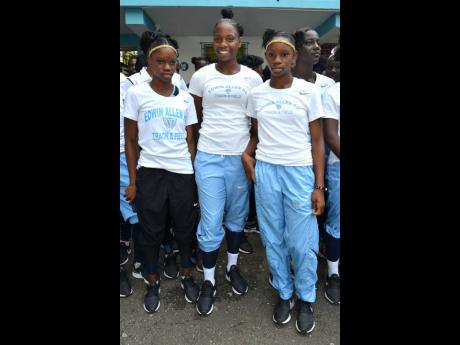 It has been a season of superb speed from the Edwin Allen girls, led by Davis along with the twin sisters – Tia and Tina Clayton – who have brought high school female sprinting to another level. Fans in North America will get a chance to see all three together when they compete at this month’s 125th staging of the Penn Relays, which will, of course, be held at the Franklin Field Stadium in Philadelphia.

Both Claytons have been part of a super Class Three 4x100m relay team, which has gone sub-45 seconds whenever they have touched the track this season, and they finished that off with a record-breaking 44.25 seconds to win at the ISSA/GraceKennedy Boys and Girls’ Athletics Championships last month.

At the Milo Western Relays in February, a Class Two quartet led by Davis became the first high school team to go under the 44 seconds, after stopping the clock at 43.96 seconds, just shy of the school record of 43.94 seconds, done in winning at Penns in 2017.

The Claytons, along with Serena Cole, another member of the talented Class Three quartet, are set to join Davis in their Penn Relays team this year, and fans are in for something special from this young group.

With a season best of 11.19 seconds from Davis in the 100 metres this season, Tina’s 11.27 and Tia’s 11.37 seconds, along with the fast-starting Cole to pop out of the starting blocks, the 2017 Penns record of 43.94 seconds is likely to be history. With this being the fastest-ever schoolgirl quartet to line up at the relay carnival, many pundits are even expecting the Edwin Allen girls to take the record to as low as 43.3 seconds.