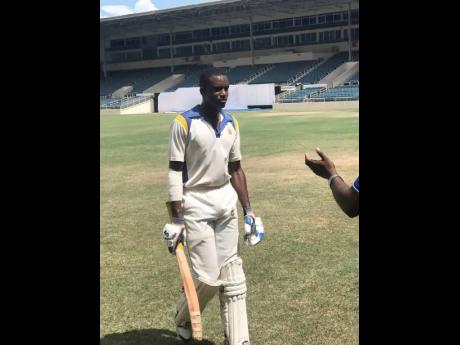 When the Jamaica Defence Force (JDF) meet Melbourne in this weekend’s Jamaica Cricket Association Senior Cup final, one man they will be banking on is their 26-year-old captain, Leighton Leslie.

The all-rounder has had an up-and-down season, scoring 276 runs from nine innings with an average of 25, while taking nine wickets at 19 apiece. He does have the knack for delivering when his team is in trouble, however, and JDF are hoping that if needed, he will come good against many -time winners Melbourne.

Leslie started out as a top-order batsman while attending Manchester High and only took up bowling 10 years ago.

“I started out as a batsman, and in a training session, we were short on bowling. I took up the ball and bowled medium pace. Coach Barry Barnes saw my potential and started to teach me the skill of swinging the ball. From then, I became an all-rounder. I went to the Jamaica Under-19 trials two years in a row, but unfortunately, [I] did not make the team.”

Leslie applied to the JDF while still in sixth form at Manchester High and was called in virtually straightaway. He has represented the JDF well with both bat and ball in the eight years since he joined the army. The youngster may not always grab the headlines, but his quiet efficiency has been one of the reasons why JDF are always a competitive team.

Leslie was rewarded for his consistent quality by being elevated to captain at the start of the season and credited his team’s discipline and belief as the main reasons behind their push towards the final.

“The level of discipline, commitment and the self-belief from the players is the main reason. We also have a good cricket programme and a good manager who ensures that the players are comfortable,” said Leslie.

While being respectful of this weekend’s opponents, Leslie believes his team has the quality to go all the way and lift the title, pointing to the team’s depth and all-round ability as its strong point.

“Jermaine Harrison and Tyrone Burton have been leading the batting and bowling so far, so we are looking forward for them to continue the good work, but we have a well-rounded team, so we are not short on fire power,” he said.