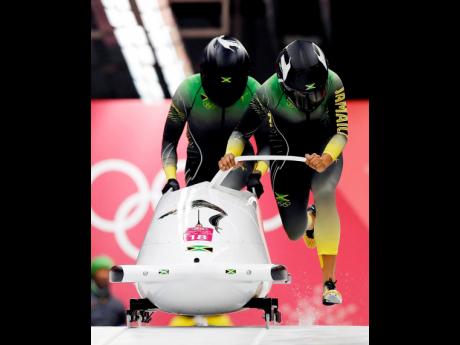 AP
Jamaican bobsledder Carrie Russell (left) and teammate Jazmine Fenlator-Victorian get their heat started during a Women’s Two Man Bobsled event at the 2018 Winter Olympic Games in PyeongChang, South Korea. Russell is now attempting to qualify for the Monobob event at the 2022 Winter Olympics in Beijing, China.

Former track and field star, Carrie Russell, began her hunt to compete in the monobob event (where the bobsled is driven by only one competitor) at the 2022 Winter Olympic Games with a silver medal performance at an International Bobsleigh and Skeleton Federation (IBSF) training and race event in Lake Placid, New York, earlier this week.

Russell accumulated a total time of 2:06.63 minutes, in her two runs to finish behind Canada’s Cynthia Serwaah, who clocked 2:05.80.

The former University of Technology student outperformed the Canadian in the first run as she stopped the clock at 1:03.17 minutes, to Serwaah’s 1:03.29.

“I have only had 58 trips down the slide, while my competitors have over 200 trips, so they have an advantage,” Russell told The Gleaner. “But I am happy I was able to do well. I am getting better over time, and it feels good to be finishing in the top two in training. This finish is also encouraging because the World Championships will be here in Lake Placid, so I will be familiar with this track.”

Last year, the International Olympic Committee (IOC) ruled that women’s monobob will be included in the Olympic Programme and athletes will make their first Olympic appearance in the event at the 2022 Games in Beijing, China.

After the event got the nod from the IOC, Russell decided to try the event.

The addition of the event excites the former St Thomas Technical High School athlete, as she saw an opportunity to fully display her athletic prowess as a strong starter with a lot of speed and her ability to pilot the sled.