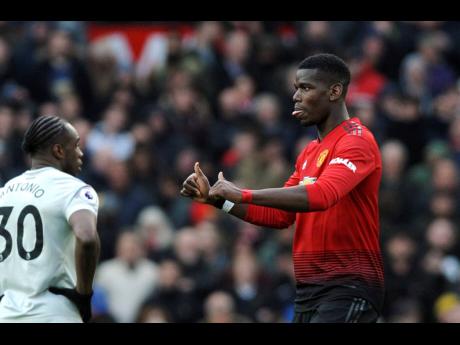 Paul Pogba converted two penalties as Manchester United stayed in the hunt for a top-four finish with a 2-1 win over West Ham yesterday that ended a run of four losses in five games.

West Ham looked the more likely team to score a winner, but substitute Michail Antonio was denied by the crossbar and a superb save from David de Gea, with the score at 1-1, before Anthony Martial was hauled down on a quick counter-attack to give United their second penalty of the match.

Pogba, who had given United the lead from the spot in the 19th minute, calmly fired the ball into the left corner to hand Ole Gunnar Solskjaer’s team a crucial win in their fight for the Champions League spots.

The win keeps fifth-place United two points behind Chelsea, with Tottenham a further point ahead. Arsenal can also move two points ahead of United by beating Watford away tomorrow.

United’s form has plummeted in recent weeks, with losses to Arsenal and Wolverhampton Wanderers in the league and an FA Cup exit against Wolves as well. Solskjaer’s team was also beaten 1-0 by Barcelona in the first leg of their Champions League quarter-final on Wednesday and couldn’t afford to drop more points against a midtable West Ham side with little to play for.

But the visitors were denied a first-half goal by the offside flag, even though replays suggested that Felipe Anderson was onside. And United’s first penalty was disputed as well, as Robert Snodgrass was adjudged to have fouled Juan Mata in the area.

“We had the luck today, you always have to take it,” Pogba said.

The France midfielder smashed that first penalty down the middle, but West Ham replied in the 49th after Anderson met a cross from Manuel Lanzini at the far post.

“We deserved something from the game, we managed to come to Old Trafford and had more possession and shots on target,” Antonio said. “I don’t know what else I could do. The one against the crossbar I connected with it beautifully. The header, maybe I should have put more on it but I still think it should go in.”