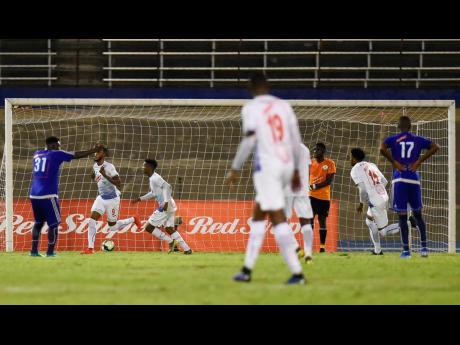 Mount Pleasant go into their Red Stripe Premier League (RSPL) semi-final second leg against defending champions Portmore trailing 2-1, however, both clubs are well aware that the tie is far from over and are prepared to put in the extra mileage that will be required to see them through to the final.

Mount Pleasant’s manager, David Galloway, said that the team took a lot of heart from the way they outplayed Portmore for most of the first leg and that that gives them confidence that they can overturn the tie. However, he says it will take extra effort at both end of the pitch to qualify for the RSPL final in their first season.

“Going into the second leg, we are a goal behind, and it means we will have to put in the extra work, both in the attacking and the defensive thirds. If we want to be in the final, we have to put in that extra, more than we did the last time, and we have to score our goals when we get them,” he said.

Galloway said that the team knew where they went wrong in the first leg and that they are looking for an even stronger performance in the return leg tonight.

Despite the one-goal advantage, Portmore coach Shavar Thomas said they do not intend to sit back and defend as it is not the Portmore way. But he believes they will have to work even harder to come away with the result they desire.

“We are leading, but that doesn’t change how we play,” he said. “That doesn’t mean we are going to sit back thinking the job is all done. This game, we will have to redouble our efforts, concentrate harder, keep the ball a lot more and just work extra harder. We just have to go into the game with that mindset.

“We are going to play Portmore football, and there will be a lot of factors as it relates to the game. So we are going to play it as it comes. But we will have put in some good work to get there (final); they are hard to play against. We know what we must come out and do. But the two teams have seen each other four times, so it’s who wants it more, and I know our team is hungry,” he said.

In the opening game of the double-header at 5:30 p.m., Waterhouse take a 2-0 lead into their tie against Cavalier. Mount Pleasant and Portmore square off in the feature game at 8:35 p.m.