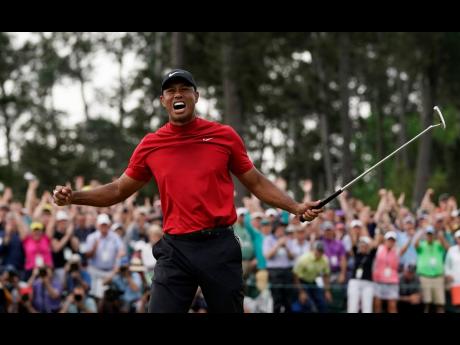 Tiger Woods rallied to win the Masters for the fifth time yesterday, a comeback that goes well beyond the two-shot deficit he erased before a delirious audience that watched memories turn into reality at Augusta National.

Woods had gone nearly 11 years since he won his last major, 14 years since that green jacket was slipped over his Sunday red shirt. He made it worth the wait, closing with a two-under 70 for a one-shot victory and setting off a scene of raw emotion.

He scooped up 10-year-old Charlie, born a year after Woods won his 14th major at Torrey Pines in the 2008 US Open. He hugged his mother and then his 11-year-old daughter Sam, and everyone else in his camp that stood by him through a public divorce, an embarrassing driving-under-the influence arrest, from a concoction of painkillers and four back surgeries, the most recent one just two years ago to fuse his lower spine.

“WOOOOOOO!!!” Woods screamed as he headed for the scoring room with chants of “Tiger! Tiger! Tiger” echoing as loud as any of the roars on the back nine at Augusta National.

“It’s overwhelming, just because of what has transpired,” Woods said in Butler Cabin. “Last year, I was lucky to be playing again. At the previous year’s dinner, I was really struggling. I missed a couple of years not playing this great tournament. To now be the champion ... 22 years between wins is a long time. It’s unreal to experience this.”

Woods lost his impeccable image to a sex scandal, one of the swiftest and most shocking downfalls in sport.

He lost his health to four back surgeries that left him unable to get out of bed, much less swing a club, and he went two years without even playing a major. It was two years ago at the Masters when Woods said he needed a nerve block just to walk to the Champions Dinner. At that time, he thought his career is over.

Now the comeback is truly complete.