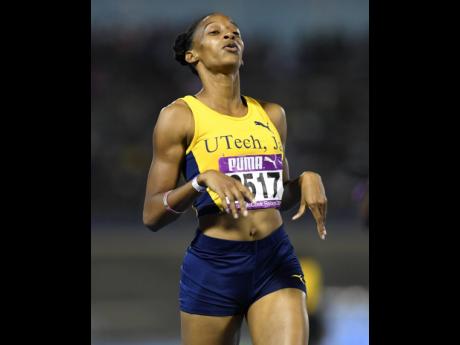 Barbadian hopeful Sada Williams produced a banner performance in the 400 metres last Saturday at the NCB Intercollegiate Track and Field Championships inside the National Stadium.

The 21-year-old slipped away from a good field to stop the clock at 51.71 seconds. The first-year University of Technology (Utech) student chopped a huge chunk off her personal best in a race that continues a fine season.

“I ran it how I usually run, go out hard, relax on the back stretch and just run as fast as I can from the 200 mark”, related the girl, who ran 52.07 seconds in 2016. “I’m looking forward to bringing down my times as the season progresses,” he said.

The new Intercollegiate champion had cruised through her Friday evening first-round race in 53.14 seconds from lane eight.

Williams was all smiles after her Intercollegiate victory.

“I only saw the flash, time but yes, I’m very excited, and yes, I’m happy for that”, she said grinning. Understandably, she thinks her move to Utech has helped. “Of course, of course, more competition and a better training ground,” she revealed.

Promising as a junior, she produced times of 22.61 and 52.07 seconds for the 200m and the 400m, respectively in 2016, but missed the Olympics due to an injury she suffered at the World Under-20 Championships. An early exit in the 200m at the 2017 World Championships left her adrift.

Though she won 400m silver and 200m bronze at the 2015 Pan-American Junior Championships and three gold medals during her time at the Carifta Games, Williams is approaching senior competition cautiously.

“It’s a huge adjustment, because you don’t have the same competition as you did as well,” she noted.

Signs of an oncoming breakthrough appeared late in February at the Gibson McCook Relays, where she clocked 52.93 seconds.

“I shocked myself, too, because I wasn’t expecting to run so fast so early in the season, but I’m very happy and excited to see where the season goes,” Williams exulted.

Her countrymen are excited, too. After her Gibson McCook run, the response in Barbados was positive. “Everyone was excited of course, because they’re saying that I’m back and they’re looking forward to 2020 Tokyo,” Williams reported.