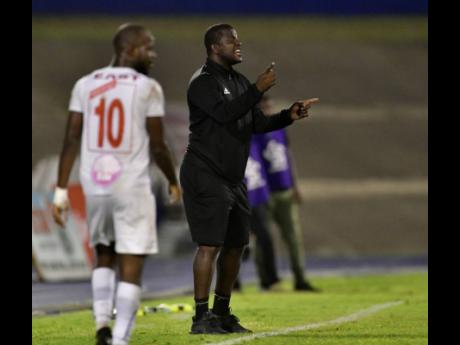 Gladstone Taylor
Portmore United head coach Shavar Thomas (right) shouts instructions to his players during their second-leg Red Stripe Premier League semi-final against Mount Pleasant at the National Stadium on Monday. The game ended 1-1 with Portmore progressing 3-2 on aggregate after a 2-1 first-leg win last week Monday at the same venue.

Portmore United coach Shavar Thomas described his team’s march to another Red Stripe Premier League (RSPL) final as a demonstration of their strength after their close 3-2 aggregate win over league newbies Mount Pleasant at the National Stadium on Monday.

The defending champions clipped Mount Pleasant 2-1 in last Monday’s first-leg assignment before playing out an exciting 1-1 draw in the return leg this Monday.

They will on April 29 face Waterhouse, in a repeat of last year’s final, after the Drewsland club tagged Cavalier 1-0 to follow up from their 2-0 first-leg win for a 3-0 aggregate scoreline.

Thomas noted that since the start of the season, teams in the league have all stepped up their game whenever they faced the champions, but he credits his team’s preparation, resilience and professionalism after securing a spot in the RSPL final for a record 11 times.

Portmore have won six top-flight league titles, while finishing as runners-up on five occasions. They ended this regular-season campaign on top of the points charts with 66 points, four more than Waterhouse. Oddly enough, that was also their points tally from last year’s campaign, when they also topped the table at the end of the regular season.

“To get back here was a major challenge because from the start of the season, all these teams in the RSPL have been coming at us, and we didn’t expect an easy road. But credit to the team, they stuck through the season, took it game by game; and now we are here again,” said Thomas.

Waterhouse lost to Portmore in last season’s final on penalties, but Thomas believes that this Waterhouse team poses a ­different threat to his team.

“It’s a different team, a different coach, but I think they still play the same style. It will be a challenge because they have a solid squad, they have experience, and they have guys who have been in this situation before, so by no means are we going to take them lightly as we haven’t beaten them all ­season. All three games were tied, so it is something to look forward to,” Thomas commented.

Javon East opened the scoring after combining with Cleon Pryce on 23 minutes, and although former Portmore player Suella McCalla pulled one back for Mount Pleasant in time added to make things a bit interesting at the end, Portmore saw the game through to secure their fourth consecutive berth to the final.

“When they got level, I was thinking that we needed to be a bit more disciplined, put in a little more effort, and we could see the game through,” Thomas shared.

The former national defender and captain was also full of praise for East, who had a goal and an assist in the first leg and a goal in Monday’s second leg.

“Strikers go through their ups and downs. I believe in terms of his scoring rate, he had a slow rise this season compared to last season. But from the get-go, he is our go-to man. We know what Javon can do, and he has grown in awareness. The only thing I think he can add to his game is to keep practising and be a little more clinical, and then you can really say he is top class,” Thomas said.

Portmore lost to Montego Bay United in the 2015-16 final and then to Arnett Gardens in the 2016-17 final before beating Waterhouse for last season’s title.