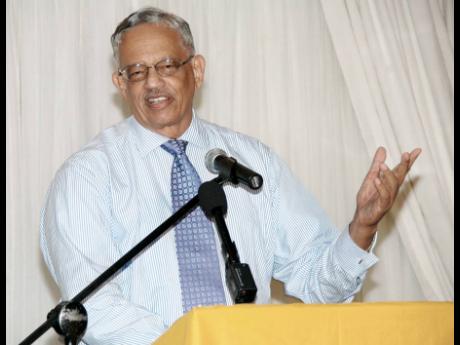 The media, telecoms, law and sporting landscape across the Caribbean, and in some instances, the world, was saddened this week to learn of the passing of the Hon Patrick Rousseau, OJ. Pat was a man amongst men, a true visionary and formidable mind whose legacy is undeniable across the region's landscape.Pat was transformative in bringing a corporate framework to West Indies Cricket when he presided over the affairs of the board from 1996 to 2001. Pat changed the face of West Indies cricket, making it a commercially viable operation that generated record revenues. Chris Dehring, who is inextricably linked with Pat Rousseau through their roles in West Indies cricket, as founders of SportsMax, and in bringing the 2007 ICC Cricket World Cup to the Caribbean, shared fond memories of Pat’s legendary negotiating skills.Dehring recalls his first meeting with Pat in the UK, where negotiations were underway with a young legal team at Sky Sports. Pat was roughly 65. As he recalls, they sat in talks for an extraordinarily long time, with Pat refusing anyone even a bathroom or lunch break. As Chris recalls, Pat continued to wear down the team until the US$40M deal was finalised at roughly 1:00 am. Pat was armed with more than intellectual persuasion. The skilful strategist had adversaries and partners alike wilting under the pressure of his sharp legal mind and his incredible stamina. Dehring also fondly recalls how sponsorship negotiations were equally fruitful under Rousseau’s presidency. As an example, Cable & Wireless’ sponsorship of the West Indies team leapt from some US$180,000 to roughly US$2.2M annually. As the esteemed founder of SportsMax in 2002, Pat’s primary mission was to ensure that Caribbean people everywhere were able to see a combination of their own, and the world’s best sporting content, right from the comforts of their living room. Pat will forever remain the hero of the SportsMax Caribbean success story as he, along with CEO Olly McIntosh, have widened distribution to some 27 markets and retains the globe's top sports rights for the last 16 years.I had the pleasure of working with 'Uncle Pat', as he was affectionately called, for 11 years at SportsMax. This colossal figure automatically earned my respect. But what is most abiding for me was not so much his achievements. It was his character. Uncle Pat proved to be a man who cared deeply about people. I recall sharing with him on one occasion how I waited six months to assume office after being hired, because this was where I wanted to be. He immediately requested that I be paid for those six months in which I showed such faith in the company. He was also quite humorous and would often introduce himself to any and everyone as "Pat Rousseau, the only President to be fired from West Indies cricket". Lengthy discussions about his beloved Manchester United excited him. As a leader, Pat imparted his knowledge, or aired his disagreements, with the utmost humility. On matters of integrity, he was unwavering and strident. I revered his management style and was deeply inspired.I recall in January of 2008 when I launched my first book, a motivational sports read for aspiring athletes and young professionals. I sent a copy to Pat. He immediately sent a cheque, insisting on paying for my work. Two days later, he tried to get in touch with me as he wanted to provide some feedback, having read my book. I dialed him with trepidation; he could be quite intimidating. Instead, he was as always, reassuring. Pat expressed being incredibly proud of me. He advised me to promote it as a book for anyone as he wasn’t an aspiring athlete or a young professional, but he was moved by my work and heartened that I mentioned the company. He purchased six additional copies for his grandchildren and a sports psychologist friend of his in Australia, who he said this type of work would resonate with. That was the last meaningful conversation I would have with Uncle Pat. It was the most humbling moment between the giant of a man and me, which ended with his suggestion that I write again in another year or two. Walk Good, Uncle Pat, I will fulfill that promise! One Love.