Will still in charge 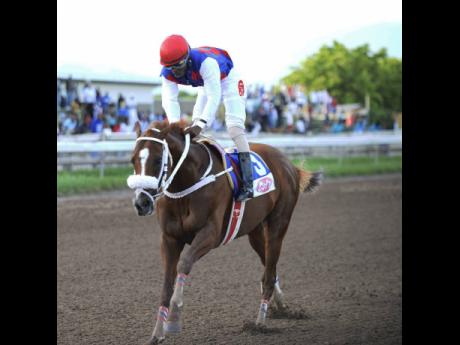 Ian Allen
Will In Charge

WILL IN CHARGE, speedier than SHE’S A MANEATER, should have this afternoon’s six-furlong Lady Geeta Trophy at his mercy. He is lighter than her and will get to CHACE THE GREAT before she does. In addition, she is drawn at post-position one and every sprint race she has won as a grade-one horse, she has had the help of a stablemate as rabbit.

Horse of the Year and Gold Cup and Diamond Mile winner, who lost only two races last season, including a head-bob, caught on the line in the Superstakes, WILL IN CHARGE has literally been handed the Lady Geeta on a platter, allotted 124lb, getting two pounds from SHE’S A MANEATER, despite beating her twice when carrying 119lb.

WILL IN CHARGE annihilated SHE’S A MANEATER by almost four lengths in last October’s seven-furlong Gold Cup, when she was four years old, and fought her like hell when giving up five pounds on a sex allowance in the Superstakes. He returned three weeks later to make rivals look ordinary in December’s Diamond Mile.

SHE’S A MANEATER’s unfortunate absence from the Diamond Mile cannot be held against her. The fact of the matter is that WILL IN CHARGE was being eased down by his rider from nearly a quarter-furlong out, carrying 126lb, yet still clocked 1:37.0, unassisted, as he galloped past the winning post, his rider oblivious to a charging BIGDADDYKOOL along the rail.

It is, therefore, a mystery how the handicapping team, after adjusting the Diamond Mile ratings, still has WILL IN CHARGE as inferior to the five-year-old mare after winning easily with topweight.

Distance not a factor

The argument about distance, regarding whether WILL IN CHARGE has ever won a sprint race, is a non-starter because, in the first place, distance is never a factor in adjusting horses’ ratings in a true handicapping system. Adjusting horses’ ratings is a performance-based exercise linked to points, which equate to weight, which, when published, allow the handlers of horses to know, in advance, the weights their charges are likely to carry in a particular class, despite distance. In a true handicapping system, it is the handlers of horses, not handicappers, whose business it is, in their wisdom, or lack thereof, whether they want their top-rated sprinter to run in a 10-furlong race, allowing stayers weight, or, vice versa, a top-rated stayer running in a sprint race, allowing speedsters weight.

If this weren’t the case, all one would have to do is run down a sprinters rating in a succession of distance races, by finishing off the board, to come in lighter in a future sprint event.

In other words, ratings for grade-one horses, the only level at which Caymanas Park’s racing office conducts its version of handicapping, should be adjusted and published publicly after every race, showing handlers of horses in that group the new weight adjustments for their charges, not to be tinkered with because of a change in distance when the next event comes up.