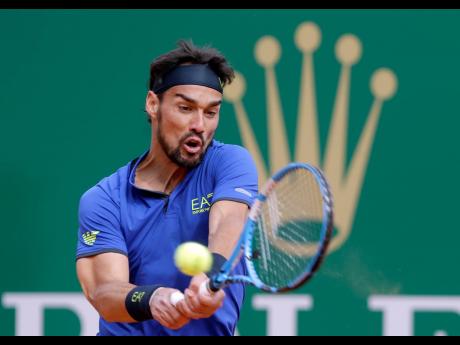 Fabio Fognini ended Rafael Nadal’s winning streak at the Monte Carlo Masters, stunning the defending champion 6-4, 6-2 yesterday to reach the final for the first time and hand Nadal his first defeat here since a loss to Novak Djokovic in the 2015 semi-finals.

Fognini had beaten Nadal twice before on clay, and also once at the US Open in five sets, but this was arguably the most impressive.

“I have the game to play against him,” the 13th-seeded Fognini said. “I had nothing to lose.”

He wasn’t concerned if Nadal was out of form.

“That’s not the question that I have to answer,” Fognini said. “I just say that I played an incredible match.”

Still, the second-ranked Nadal called it “one of my worst matches in 14 years”, and the 32-year-old Spaniard said it was “difficult to find an explanation” for capitulating on his favoured clay-court surface.

Yet the defeat could have been even more humiliating for Nadal, who had not lost a set here by 6-0 since the 2005 final – which he went on to win for the first of his record 11 titles.

Fognini came so close to drubbing him in the second set. He served for the match at 5-0 and 40-0, but Nadal saved three match points, broke back and held.

Serving again for the match at 5-2, Fognini hit a superb forehand down the line on his fourth match point. He next plays unseeded Serb Dusan Lajovic in their first-ever meeting, and one few would have predicted.

The 48th-ranked Lajovic staged an impressive comeback of his own, meanwhile, rallying from 5-1 down to beat 10th-seeded Daniil Medvedev 7-5, 6-1.