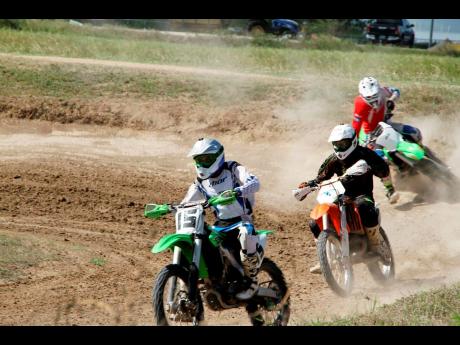 Contributed
Chris Haddad (left) leads the pack at the start of the second moto of A Class followed by Kyle Reynolds and Johnny Reijnen, during the second round of MX Jamaica 2019 Motocross Series at DaCosta Farm on Saturday, April 13.

Reynolds, with 22 points, finished second to Powell (25) in the first of two races in the class, but came back strong to win their last two races with 25 points, putting him ahead of Chris Haddad (22) and Powell (20).

With 97 points under his belt, Reynolds now leads that section with Powell currently sitting second with 88 points, followed by Haddad with 42 and Antonia Rizza on 32.

Reynolds also leads in ‘A’ class with 89 points, despite finishing fourth on the weekend.

Powell, who also serves as MX Jamaica vice-president, was pleased with the growing involvement and competitiveness in the sport.

“No class was dominated by any rider. We had numerous cases where a rider was leading with two or three laps to go and ended up third or fourth, so it shows how competitive it was,” Powell said.

Meanwhile, Adrian Barnes took the 85cc Class with 50 points, beating Cruz Kow with 44 points into second place and Jordan Vaz and Cameron Lee into third and fourth, respectively, with 38 points. However, Kow leads the overall table with 87 points, with Barnes second on 83, Lee third with 78 and Vaz fourth on 76.

Rylan Sampson leads the overall standings after two rounds of competition with 86 points, Gomes is second on 50 and Burrows third with 42.

In the 50cc category, Craig Powell Jr continues to lead after posting maximum 50 points to take the section. He also leads the overall standings ahead of Alex Grant with 44 points.

The third meet in the series is scheduled for June at Temple Hall, and Powell anticipates more competitors and even tougher competition.

“At the end of the year each class will have a champion. Each event (meet) is called a round, and after round six, we will accumulate the points and determine a winner for each class,” he explained.