Jamaicans get off to strong start at Carifta Games 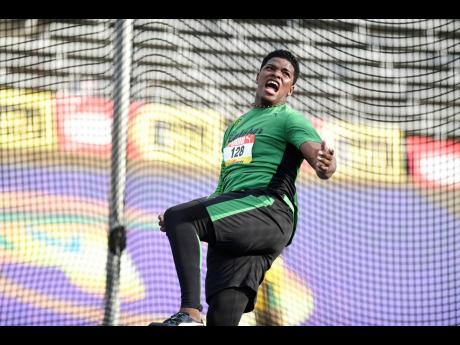 It was a great start for Jamaica’s young athletes at yesterday’s opening day of the 48th Carifta Games inside the Truman Bodden Sports Complex in The Cayman Islands.

Bent on bettering last year’s performance in The Bahamas, where the country captured some 82 medals, the Jamaicans made their intention very clear in the morning session, with outstanding results in the field, where they had 1-2 finishes in four of the events.

The Jamaicans picked up 5 gold and four silver medals for a quick early nine medals in the opening hours of the championships.

Vere Technical’s high jumper, Annishka McDonald gave the country a perfect start, after winning the girls under-17 high jump, with a clearance at 1.74m, with Vanessa Mercena of Curacao finishing second, also clearing 1.74m and Shaunece Miller of The Bahamas taking third place with 1.68m.

Edwin Allen’s Jonique Burgher won the under-20 equivalent with 1.77m, the same height done by her country-woman, Daniela Anglin (Herbert Morrison), who finished second with third going to Aijah Lewis of the host team with 1.60m.

Vere’s Marie Forbes along with Edwin Allen’s Kimone Reid, gave Jamaica it’s third quinella of the morning session among the females, after taking gold and silver in the girls under-20 discus. Forbes won with 47.63m, ahead of Reid 44.60m, with Kelsie Ross Murrell of Grenada taking bronze with 40.30m.

Calabar’s Kai Chang and Edwin Allen’s Christopher Young closed out the morning session on a successful note for Jamaica, after winning their respective events. Chang the IAAF World Under-20 discus champion, easily won his pet event with a throw of 59.36m, with his team-mate Ralford Mullings taking the silver with 54.91m. Young captured the under-17 shot put with a heave of 16.00m, beating team-mate Kobe Lawrence into second place with 15.86m.

The country looks set to reap more medals when competition on today’s second day gets underway at 9:00 a.m. with the girls under-17 Javelin throw finals.

The morning session will also see the long jump finals for under-17 girls at 11:10 a.m.

Sixteen more finals will take place in the afternoon session including the 400m hurdles, 800m and 200m for both age groups.