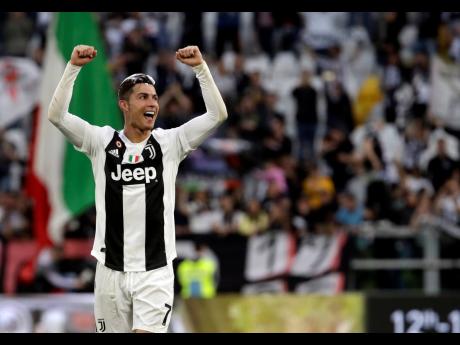 Luca Bruno
Juventus’ Cristiano Ronaldo celebrates at the end of a Serie A match between Juventus and AC Fiorentina, at the Allianz stadium in Turin, Italy, yesterday. Juventus clinched a record-extending eighth successive Serie A title, with five matches to spare, after they defeated Fiorentina 2-1.

And it was a big relief for Juventus following their elimination by Ajax in the Champions League last Tuesday, after failing to clinch last weekend with a surprise loss at Spal.

Juventus needed only a point but quickly fell behind when Nikola Milenkovic took advantage of confusion inside the Bianconeri area to score for Fiorentina six minutes in.

However, Alex Sandro headed in from a corner for the equaliser and Ronaldo’s cross from a sharp angle was then redirected in by Fiorentina defender German Pezzella either side of half-time.

“It was a very good first season and I adapted well. We won the ‘scudetto’ and the Italian Super Cup, which is certainly not easy to achieve,” Ronaldo said. “You can’t win all the time. We felt that we could do more ... but only one side can win the Champions League.

“Next year is a new page, the fans all want it and so do we,” Ronaldo said of the Champions League, adding that he’s “1,000 per cent” certain he will stay with Juventus for next season.

After the final whistle, Juventus players celebrated by forming a circle and jumping up and down clapping their hands. Then they drank champagne and some players invited their children out to take part in the festivities.

Juventus moved 20 points ahead of second-place Napoli, who have six games left.

It was Juventus’ 35th title overall. However, the jumbo screens inside Allianz Stadium flashed No. 37 to include the 2005 and 2006 titles that were stripped in the Calciopoli match-fixing scandal.

The only other club in the top five European leagues that had won seven straight was Lyon in France from 2002-08.

The Juventus women’s team also clinched the Italian title yesterday, with a 3-0 win at Hellas Verona in the final round of the season. It’s the second consecutive title for the women’s squad.