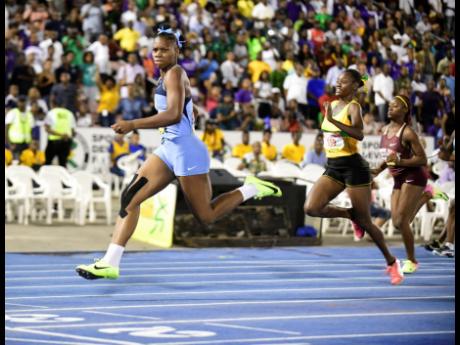 ISSA/GraceKennedy Girls’ Athletics champions Edwin Allen will leave the island this morning for the 125th staging of the Penn Relays at Franklin Field in Philadelphia, Pennsylvania, which runs from Thursday to Saturday.

The Michael Dyke-coached team are the defending champions in the 4x100m relay, and the team, led by the outstanding Kevona Davis, are favourites to retain their title and make it six wins in a row.

They are the record holders in the event, with the milestone of being the first high-school female quartet to go sub-44 seconds when they won in 43.96 two years ago. With twin sisters Tia and Tina Clayton set to be part of the team this year, a low 43 seconds looks likely.

The team will compete in the 4x100m, 4x400m and 4x800m relays, while they will have athletes also competing in individual events.

“We are very confident of doing very well this weekend, as we hope to defend our title in the 4x100m relay and we are hoping to win our first 4x800m title since 2012,” Dyke said.

Edwin Allen have been the top team this season in the latter, and they will be hoping to dethrone defending champion, Holmwood.

Two members of Edwin Allen – long jumper Lotavia Brown and high jumper Jonique Burgher, who are now in the Cayman Islands representing Jamaica at the 48th Carifta Games – will join their teammates in Philadelphia on Wednesday.